Today a half page advertisement appeared in the Guardian Newspaper, calling out British Prime Minister Theresa May for misleading Parliament at Prime Minister's Questions regarding the investigations into conflict-related deaths in the north. 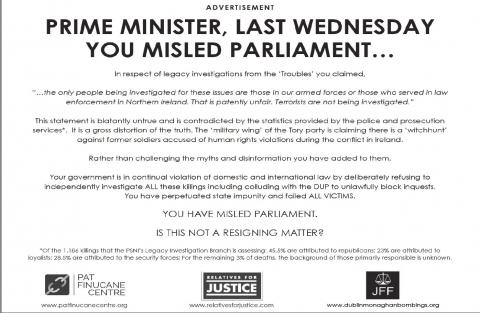 Over the past week the row over how to deal with the conflict has erupted again. However, this time Theresa May has shown an interest and weighed in on the debate- getting it spectacularly wrong.

During Prime Minister’s Question time on Wednesday 9th May Theresa May stated the following:

"The situation we have at the moment is that the only people being investigated for these issues are those in our armed forces or those who served in law enforcement in Northern Ireland.

This statement is demonstrably untrue, and as former Justice Minister David Ford stated, comes perilously close to political interference. Countering the falsehoods perpetuated by those who want to protect only their ilk is exhausting, but it is important to do so when the untruths are hurtful and harmful to those directly affected.

Last year the PSNI Legacy Investigation Branch (LIB) released a “Fact-File” outlining the state of play of conflict-related investigations. This was in response to attacks on the PSNI and Public Prosecution Service that there was a “witch-hunt” against former soldiers while “terrorists” got off scot-free.

(Incidentally the day after May’s speech the PSNI arrested a man in connection with the IRA murder of Matthew Boyd in 1993.)

The fact-file, reproduced verbatim on PFC’s website, stated that of the 1,615 cases completed by the HET

It also provided a breakdown of the current work-load of the LIB, comprised of 55 detectives across 4 teams examining a range of cases including, amongst others, the murder of Jean McConville, Kingsmill, Bloody Sunday, the activities of the Military Reaction Force (MRF) and the “On the Runs” cases.

Updated figures from the PSNI were outlined by Rory Winters in The Detail last month. They reveal that of the 1,186 killings that the PSNI’s Legacy Investigation Branch is assessing:

Where did Theresa May’s statement come from?

A draft consultation paper was circulated to Ministers last week outlining the proposals to deal with the legacy of the past based on the Stormont House Agreement (SHA), an agreement made by the main political parties and the Irish and British government in December 2014. SHA includes plans to establish a number of different mechanisms including an independent investigative body to look at outstanding cases, an oral history archive and a mental trauma service to meet the needs of victims and survivors.

What was absent, however, was any mention of a statute of limitations for former members of the British Armed forces that would protect them from prosecution for offences committed during the ‘Troubles’. Such a statute was not agreed in the SHA but has been on the agenda of the military wing of the Tory party and some, not all, of the DUP and was recommended by Westminster’s Defence Committee to protect Northern Ireland Veterans.

They were outraged at the decision to prosecute former soldier Dennis Hutchings for the attempted murder of vulnerable adult John Pat Cunningham in Benburb in 1974 and the announcement that two former (unnamed) members of the Parachute Regiment are to be prosecuted for the murder of Official IRA Man Joe McCann in Belfast in 1972. (We are also awaiting a decision on whether any soldiers will be prosecuted in respect of Bloody Sunday.)

Legal advice suggests that such a one-sided statute would contravene domestic and international law and would have to operate across the board i.e. include all actors in the conflict, to possibly succeed. For this reason it has been largely rejected by the DUP and the innocent victim lobby who will not accept a de facto amnesty for paramilitaries. However, some within the DUP and Tory party are pushing for its inclusion, with Jeffrey Donaldson advocating for such an act to cover the British Armed Forces involved in all conflicts with immunity for prosecution becoming operational after a certain number of years.

Reports suggest that when the draft consultation paper was distributed there was (another) split within the Cabinet and this row came to a head, spilling over into PMQ’s were May clearly bowed to the pressure of the military-wing of her party. Even more disappointingly NI Secretary of State Karen Bradley sat nodding obediently as May spoke, despite having met recently with families whose loved ones were murdered by state actors.

Following the fall out last week and leaked consultation papers to the media, the Northern Ireland Office released the consultation paper on the proposed Stormont House mechanisms to deal with the past. It is now available on-line and victims and survivors are encouraged to read the proposals and respond with their thoughts and views.