The PFC is named in memory of Pat Finucane, a human rights lawyer from Belfast who was murdered in front of his wife and children on 12 February 1989 by the pro-British UDA. Pat had successfully challenged the British Government over several important human rights cases. One of those involved in his murder, Brian Nelson, was working for the Force Research Unit an undercover unit of British Military Intelligence. Ken Barrett who was convicted of Pat’s murder was also a state agent. Another UDA member William Stobie who provided the gun which killed Pat was subsequently recruited by RUCSB. 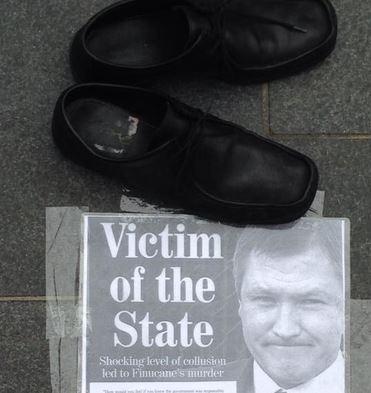 In the years since Pat’s murder there have been a number of investigations, inquiries and reviews. Initially the RUC was tasked with the investigation, given the levels of state involvement in the murder this investigation was doomed to fail from the start.

Initially John Stevens, former Assistant Chief Constable, Cambridgeshire Constabulary, was asked to conduct an inquiry into security force documents ‘falling’ in the hands of loyalist paramilitaries. He eventually conducted three investigations and as a result of these investigations he came upon information relating to Pat’s murder. Unfortunately only twenty pages of a summary of Steven’s third report have ever been made public.

In 2001 retired Canadian Judge Peter Cory was asked to conduct a review of six cases involving allegations of collusion and to make recommendations on the need for inquiries, Pat’s murder was one of these cases. In 2004 Judge Cory recommended that there should be in inquiry into Pat’s murder. The two Governments had agreed to act on the judge’s recommendations. However the British Government the repealed legislation which would have enabled an inquiry into Pat’s murder to take place and replaced it with a new Inquiries act which gives government ministers powers to restrict access to information and to order that all or parts of the inquiry should be heard in private. Pat’s family and legal representatives rejected this attempt at a cover-up and to date no inquiry has taken place into Pat’s murder.

In late 2011, Pat’s family met David Cameron the then Prime Minister in Downing Street and where told that no inquiry would take place, Cameron saying there are “people in buildings all around here who won’t let it happen.” They were informed that there would be a review of all the available information. This was immediately rejected by the family.

The British Government asked Desmond de Silva to conduct this review, his report was published on 12 December 2012.The report documented extensive evidence of State collaboration with Loyalist paramilitaries. David Cameron acknowledged "shocking levels of collusion" and issued an apology to Pat’s family.

The families fight for truth and justice continued and in May 2013, British Government dating from 2011 revealed that senior members of Margaret Thatcher's government may have been aware of "a systemic problem with loyalist agents" at the time of Pat’s murder but had done nothing about it.