Why would an Irish based human rights group produce an exhibit on the legacy of colonialism? And why here and why now?

The question about here and now is easy to answer. This launch of this exhibition took place in August 2017 in the Museum of Free Derry. There are few places more appropriate to have an exhibit on the poisonous legacy of colonialism. It really needs no explanation. Bloody Sunday, Amritzar,  As regards timing. In 2017 India and Pakistan commemorated 70 years since partition, an event that marked the end of British rule and led to the deaths of millions and displacement of millions more. One footnote. In the grounds of the Royal Academy in Dungannon there is a statue to Brig General John Nicholson. He was killed during the siege of Dehli. He advocated the…

'flaying alive, impalement or burning,' of Indian prisoners and added, 'I would inflict the most excruciating tortures I could think of on them with a perfectly easy conscience.'

Should we have statues to such people? 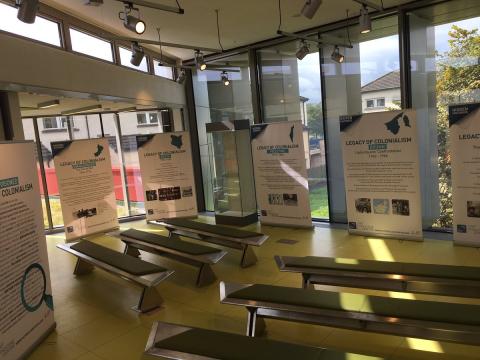 In 2020 the legacy of racism and slavery in the US, in particular in numerous police departments across the country, has manifested itself in the on-going killings of people of colour and the growth of the Black Lives Matter movement worldwide. Racism and slavery-the motor that drove and financed the empire, is the backdrop to the crisis in the US today.

And the answer as to why we would look beyond our shores in such an exhibit is to be found in the on-going impact of British military policies and practices in the north of Ireland in the early 1970s. Policies and practices that were to leave a disastrous legacy in particular on working class nationalist/republican communities. Unarmed civilians were shot dead by British troops with impunity. Daily harassment and repression was the norm and even now new evidence is emerging of horrendous cases of torture including the use of waterboarding and electric shocks.

Relatives of those who were killed (and were then labelled terrorists, gunmen and bombers) continue to seek truth and acknowledgement. Many of the victims of torture are still with us.

And crucially, the military policies and practices that defined Operation Banner, the military name for deployment in the North from 1969 to 2007, did not begin nor did they end on the island of Ireland.

Internment, mass screening of civilians, the use of the five torture techniques, waterboarding and electric shocks, states of emergency, massacres by troops and the use of undercover secret units had long been standard practice in the counter-insurgency wars fought during the retreat from empire. 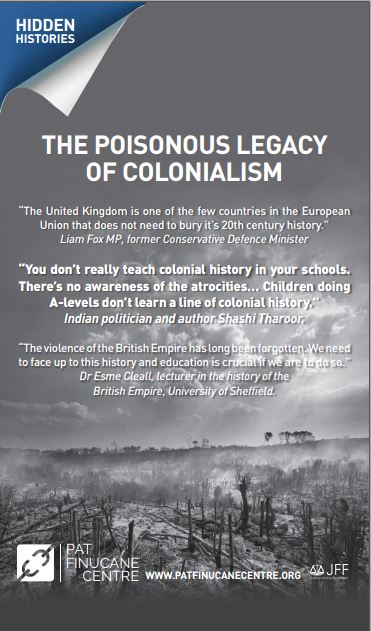 Troops that stepped off boats in Derry and Belfast in 1969 were often fresh from other brutalising conflicts as the sun began to set on the empire. That units such as the Parachute Regiment would go on to commit  massacres (Bloody Sunday, Ballymurphy, Springhill) or use waterboarding on detainees is hardly surprising given their record in other conflicts. Both the first and second battalion of the Paras had served in Aden.

Senior officers who had free rein in Cyprus or Aden such as Brigadier Frank Kitson soon set about implementing low intensity war tactics that had been tried and tested. The European Convention on Human Rights cut little ice in military circles. Kitson created undercover units (the MRF) whose aim was to provoke sectarian conflict. Similar units had been set up in Cyprus (Q Patrols) and Oman (firqats). It is striking that every single General Officer Commanding the British Army in the north in the 1970s had seen military service in the ‘colonies’.

Prior colonial service was not limited to the ranks of the military. Two RUC Chief Constables in the 1970s had been colonial police. Arthur Young served in Malaya and Kenya though it should be noted that Young was apparently appalled by the atrocities being carried out in Kenya by British forces and left after less than eight months.

Kenneth Newman’s stint in Palestine as a young officer came some 20 years after Major General Henry Tudor established the Mandate Police Force. Tudor had form. He had created and commanded the Infamous Black and Tans during the Irish War of Independence and succeeded in bringing many of his former Tan comrades with him to Palestine.  Between 75% and 95% of the ‘gendamerie’ that he commanded were former ‘Tans’. 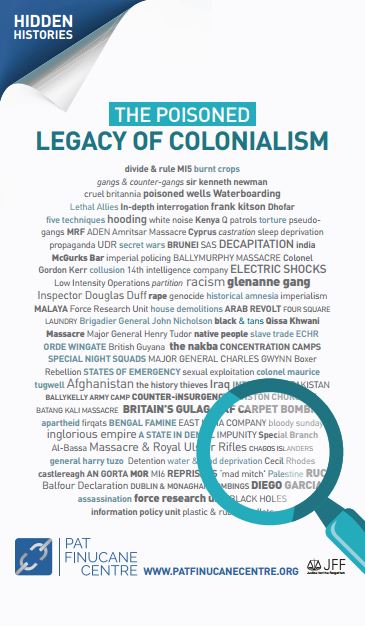 In 1971 allegations of torture began to emerge from interrogation centres in the north. This led to the Irish Government taking a case to the European Court of Human Rights. The location of the most egregious torture, including the use of the ‘Five Techniques’ (see box), has only recently been revealed. Declassified documents found by the Pat Finucane Centre confirmed that a selected group of men were tortured at Ballykelly army camp near Derry.

The same documents contain the name of a senior officer, an expert in interrogation from the Joint Services Interrogation Wing at Ashford in Kent, who was in charge in Ballykelly in 1971. We will return to this individual.

As the conflict here escalated the ten year secret war in Oman/Dhofar continued.  The SAS were hired out as mercenaries to the Sultan to fight a war cloaked in exceptional secrecy. This climate of secrecy mirrored the almost complete failure in Britain to highlight human rights abuses that occurred in the retreat from empire.

To this day there is little mention of the dark side of empire in the curriculum, in parliament or in the media. The Imperial War Museum tells a fascinating story but the torture, massacre and repression that was a hallmark of empire is conspicuous by its absence from the exhibitions. Little wonder that the same violations have recurred more recently in Iraq or Afghanistan. The then Attorney General, in evidence to the European Commission of Human Rights in Feb 1977 made a solemn promise that the Five Techniques would never again be permitted. Not long after the Iraq invasion British army units began interrogating prisoners using the Five Techniques.

So the people of Iraq and Afghanistan, and as we speak, the people of Yemen, pay the price for the collective failure to face up to the poisonous legacy of empire.

According to the 2011 Baha Mousa Inquiry a Lt Col John Robert Nicholson OBE had admitted to an earlier inquiry (The Parker Inquiry) to being ‘personally present’ when the 'five techniques' were used in Aden and British Guyana.  Nicholson also discloses from personal knowledge that they had been used in other countries, including Cameroon, Borneo, Cyprus and Malaysia. Declassified documents discovered by the PFC confirm that the same Lt Col John Nicholson who served at Aden was the most senior British army officer at Ballykelly in 1971 when the ‘Hooded men’ were tortured.

The International Slavery Museum opened in August 2007 and by December 2016 had… http://www.liverpoolmuseums.org.uk/ism/