The families of over 100 people, on both sides of the border in Ireland, murdered by the Ulster Volunteer Force, in collusion with state forces including the Royal Ulster Constabulary (RUC) and the Ulster Defence Regiment (UDR), have welcomed today’s High Court ruling. 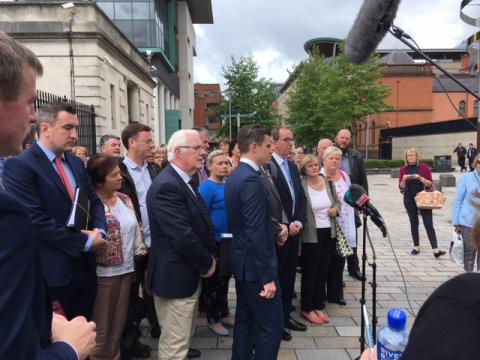 It is, for the first time, a legal acknowledgement that their relatives’ lives were taken by state forces duty and honour-bound to uphold the law and protect life.

The families, the Pat Finucane Centre/Justice for the Forgotten and their lawyers had given the court indisputable evidence (including ballistics and other forensic details) drawn from over 50 reports from the Historical Enquiries Team (HET); from the reports ordered by the Irish government, conducted under Judge Henry Barron, and catalogued in Lethal Allies: British Collusion in Ireland.

It is troubling that the bereaved families themselves have been forced to litigate to uphold their basic right to an effective investigation, particularly so that such litigation arose from an investigation started by officers from England, but later discontinued by the PSNI.

The HET had promised the families a thematic report into what has become known as the “Glenanne Series” of murders.  Once this report was 80% concluded, however, it was without good reason suppressed.  It remains unfinished.

The families have yet to receive any acknowledgement, let alone apology, from the British government for its role in the murder of their loved-ones.

Let there be no confusion about this ruling.

Today, Mr Justice Treacy has concluded that the RUC and the largest regiment in the British Army at the time, the UDR, have a case to answer against credible charges of mass murder.  He has confirmed what the families always knew to be true, that their loved ones were the victims of state-sponsored murder.

Now the court has ruled that the families had a legitimate expectation and right to an independent investigation, the ball is in the British government’s court to find an equally independent mechanism to conclude the work.  We look forward to hearing the government’s proposals without any further obfuscation and delay.

(NOTE: The NI Police Ombudsman is currently investigating this series of murders and many of the bereaved families are suing the Chief Constable of the PSNI, the British Ministry of Defence and the Secretary of State.)