Order of Mandamus in Glenanne Cases

Copy of the Order of Mandamus issued by Judge Treacy on 7 November 2017 compelling the Chief Constable to put in place a mechanism to complete the Overarching Report into collusion in over 120+ killings attributable to the Glenanne gang. 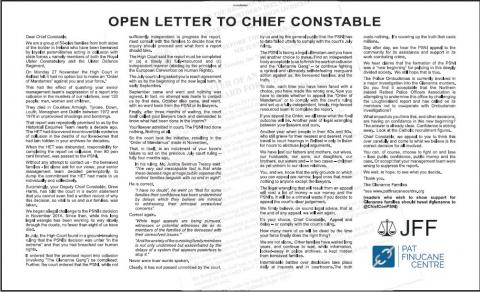 Today in the Irish News, the Glenanne families have published the following open letter to the Chief Constable:

We are a group of 50-plus families from both sides of the border in Ireland who have been bereaved by loyalist paramilitaries acting in collusion with state forces - namely members of both the Royal Ulster Constabulary and the Ulster Defence Regiment.

On Monday 27 November the High Court in Belfast felt it had no option but to make an “Order of Mandamus” against you and your force.*

This had the effect of quashing your senior management team’s suppression of a report into collusion in the murders of our relatives, over 120 people: men, women and children.

They died in Counties Armagh, Tyrone, Down, Louth, Monaghan and Dublin between 1972 and 1978 in unprovoked shootings and bombings.

That report was repeatedly promised to us by the Historical Enquiries Team nearly a decade ago. The HET had discovered incontrovertible evidence of collusion in the deaths of our loved-ones that had lain hidden in your archives for decades.

When the HET was disbanded, responsibility for completing the report on collusion, then 80 per-cent finished, was passed to the PSNI.

Without any attempt to contact us - the bereaved families - let alone ask for our views, your senior management team decided peremptorily, to dump the commitment the HET had made to us individually and collectively.

Surprisingly, your Deputy Chief Constable, Drew Harris, has told the court in a sworn statement that you cannot even find a written record of why this decision, so vital to us and our families, was taken.

We began a legal challenge to the PSNI’s decision in November 2014. Since then, while this long legal wrangle has been working its way slowly through the courts, no fewer than eight of us have died.

In July, the High Court found in a ground-breaking ruling that the PSNI’s decision was unfair “in the extreme” and that you had breached our human rights.

It ordered that the promised report into collusion (involving “The Glenanne Gang”) be completed. Further, the court ordered that the PSNI, while not sufficiently independent to progress the report, must consult with the families to decide how the inquiry should proceed and what form a report should take.

The High Court said the report must be completed in (a) a timely (b) fully-resourced and (c) independent manner (abiding by the principles of the European Convention on Human Rights).

The July court ruling asked you to reach agreement with us by the beginning of the new legal term, in early September.

September came and went and nothing was agreed. In fact, no attempt was made to contact us by that date. October also came, and went, with no word back from the PSNI or its lawyers.

Finally, after three months of waiting, the court itself called your lawyers back and demanded to know what had been done in the interim?

Your lawyer admitted in court. The PSNI had done nothing. Nothing at all.

So the court took the initiative, resulting in the “Order of Mandamus” made in November.

That, in itself, is an indictment of your force’s failure to act on the previous July court ruling – fully four months ago.

In his ruling, Mr. Justice Seamus Treacy said: “The very sad inescapable fact is that while these debates rage at huge public expense the victims’ families languish with no end in sight”.

“I have no doubt”, he went on “that for some families their confidence has been undermined by delays which they believe are inimical to addressing their principal unresolved concerns”.

“While legal appeals are being pursued, witnesses or potential witnesses die as do members of the families of the deceased with their unresolved issues.”

“And the anxiety of the surviving family members is not only undimmed but exacerbated by the delays of a system that appears powerless to stop it.”

Clearly, it has not passed unnoticed by the court, by us and by the general public that the PSNI has to date failed utterly to comply with the court’s July ruling.

The PSNI is facing a legal ultimatum and you have yet another choice to make. Find an independent body acceptable to us to finish the work on collusion and the “Glenanne Gang” – or continue fighting a cynical and ultimately self-defeating rearguard action against us, the bereaved families, and the truth.

To date, each time you have been faced with a choice, you have made the wrong one. Now you have to decide whether to appeal the “Order of Mandamus” or to comply with the court’s ruling and set up a fully-independent, timely, ring-fenced resourced team to complete the report

If you appeal the Order, we all know what the final outcome will be. Another year of legal wrangling between your lawyers and ours.

Another year when people in their 80s and 90s, who still grieve for their nearest and dearest, must travel to court hearings in Belfast – only to listen for hours to abstruse legal arguments.

We have lost our fathers and mothers, our wives, our husbands, our sons, our daughters, our brothers, our sisters and – in two cases – children as yet unborn to our close relatives.

You, and we, know that the only grounds on which you can appeal are narrow, legal ones that mean nothing to anyone except the lawyers.

The legal wrangling that will result from an appeal will cost a lot of money – our money and the PSNI’s. It will be a criminal waste if you decide to appeal the court’s clear judgement.

We firmly believe, on sound legal advice, that at the end of any appeal, we will win again.

It’s your choice, Chief Constable.  Appeal and delay – or comply with the court’s ruling.

How many more of us will be dead by the time your force finally does the right thing?

We are not alone.  Other families have waited long years, and continue to wait, while information, locked-away in police archives, is kept hidden from bereaved families.

Interminable battles over disclosure take place daily at inquests and in courtrooms.The truth costs nothing.  It’s covering up the truth that costs millions.

Day after day, we hear the PSNI appeal to the community for its assistance and support in its work combating crime.

We hear claims that the formation of the PSNI was a “new beginning” for policing in this deeply divided society.  We still hope that is true.

The Police Ombudsman is currently involved in a major investigation into the Glenanne murders.  Do you find it acceptable that the Northern Ireland Retired Police Officers Association is attempting to undermine this office by challenging the Loughinisland report and has called on its members not to co-operate with Ombudsman investigations?

What impact do you think this, and other decisions, are having on confidence in this new beginning? The answer is already clear.  Confidence is ebbing away.  Look at the Catholic recruitment figures.

Chief Constable, we appeal to you to think this over carefully and come to what we believe is the correct decision for all involved.

You can, of course, choose to fight on and lose – lose public confidence, public money and the case. Or accept that your management team were wrong to suppress the report.

We wait, in hope, to see what you decide.