Statement from Linda Duffy, daughter of Harry Duffy | 22 May 2021

“I have been trying for weeks to write something about the 40th anniversary of my father’s death, but I can’t. My anger is so real that it stops me. May is a hard month for our family. It comes every year and I feel like I’m holding my breath until it’s over.

My father Harry Duffy, known as Harry ‘Dundalk’, was killed by the British army in the early hours of 22nd May 1981. He was struck by a plastic bullet in the head. His death left me and my three brothers and three sisters as orphans. It shattered our lives. 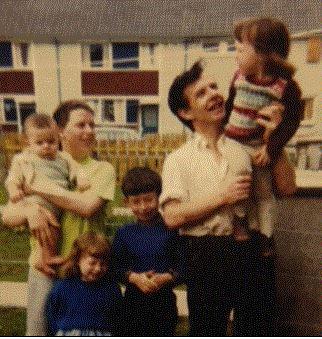 I could write about how much we loved our father, what a great man he was, how much he is missed, that he did everything for us after our mother died, that it was so hard for him as a single father, but he really did his best and loved us and we were happy. That is all true, but it isn’t enough.

I have so much anger at how the British government are treating families like ours, who had parents and brothers and loved ones killed by their soldiers. We can’t grieve his loss like other losses because they won’t let us.

A few weeks ago the government said they were bringing in an amnesty, effectively taking ‘justice’ off the table.

I never thought we would get a prosecution for my father’s murder, but that isn’t the point. We have a right to be told how and why our father died, to have an investigation into his death, because that’s what we were promised, and that is our human right. But the British government keep moving the goal posts.

They set up the HET to look at these deaths - they came to us, knocked on our door, opened this up again, and promised us that they would investigate his death. They didn’t. For ten years we have been stuck in limbo waiting for something to happen and now this- an amnesty. It is cruel, disgusting, and more than an insult.

Our family has endured so much loss in our lives. We lost our mum that we loved equally as much as our father. We had other losses too. But this loss is the one we can’t move on from, because they won’t let us. We are stuck in this loss. It has taken me thirty years to realise that, and I am angry.

This isn’t about murder. This isn’t about prosecutions. This is about basic human rights, basic civil rights. The British government are putting themselves above the law. People in Britain need to know what they are doing to us here, and how they are using these laws to murder people today in other wars in other countries, and getting away with it.

I think of the Ballymurphy families, and all families, who have had 40 – 50 years of being tortured. They have had to fight every second of those years for the truth to be acknowledged. They tell us to move on, but they won’t let us. I think of my family, and our children who have missed out on the life they should have had because of what happened to my father.

Henry (Harry) Duffy was shot and killed by a soldier of the 2nd Battalion Royal Anglian Regiment near to the junction of Little William Street and Sackville Street, Derry, on 22nd May 1981. He had been struck in the head by a plastic bullet in the early hours of the morning and died a couple of hours later in Altnagelvin hospital. He had been caught up in the unrest following the death of Derry hunger striker Patsy O’Hara on 21st May 1981. Harry had been struck by a 145 PVC Plastic Bullet Round, heavier than the RUC 122 PVC/ PBR.

Following Harry’s death, the children never returned to their family home in Benevenagh Gardens in Creggan, they were taken into care, first to Termonbacca and then Nazareth House, before being fosters out to relatives.

Last year the family asked the Attorney General to open a fresh inquest into the circumstances of their father's death, but to date a decision has not been made.