MI5 agents have been granted legal immunity to participate in murder, torture, sexual assaults and other criminality, a tribunal has heard.

The secret policy may, for decades, have enabled the security service to conceal illegal activity, Ben Jaffey QC told the investigatory powers tribunal.

Even oversight of the practice, introduced in 2012, was kept secret, and the judge appointed to oversee it instructed not to comment on the policy’s legality, he alleged.

The claims have emerged in a case brought by an alliance of human rights group including Privacy International, Reprieve, the Committee on the Administration of Justice and the Pat Finucane Centre.

The allegations suggest that MI5 sought to give its agents and informants even greater freedom to commit criminal offences than the protections available to police informers.

But the MI5 policy is itself illegal if it breaches fundamental human rights such as the ban on using torture, Jaffey said.

“It can be no coincidence that Prime Minister David Cameron issued new guidelines, however flawed, on oversight of MI5 just two weeks before publication of the De Silva report into the murder of Pat Finucane. The PM was clearly alive to the alarming evidence which was about to emerge of the involvement of the Security Service in the murder. To date no-one within a state agency has been held accountable. The latest revelations make the case for an independent inquiry all the more compelling.” 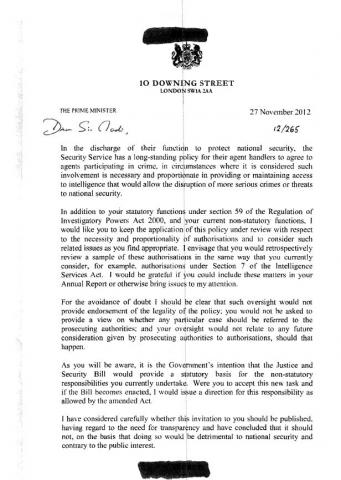 Brian Gormally, Director of the Committee on the Administration of Justice said:

“MI5 has an estimated 500+ officers in Northern Ireland and runs agents here. If these state agents are “authorised” to commit serious crimes that constitute human rights violations that would be unlawful and potentially involve collusion with illegal armed groups. We have had enough of such behaviour by the secret state – the nature and extent of these “authorisations” should be made public.”

“We want to know if it’s Government policy to let MI5 agents get away with serious crimes such as torture and murder.  While our intelligence agencies have an important role in keeping this country safe, it does not follow that agents can be permitted to break the law without limits. If this is indeed the Government’s position it must inform MPs and the public, and open the policy to legal and parliamentary scrutiny.”