Truth Recovery
Stormont House Agreement
consultation
Dealing with the past

The Pat Finucane Centre have prepared an extensive response to the NIO's consultation to deal with the legacy of our past. It can be downloaded by clicking the link at the bottom of this past. 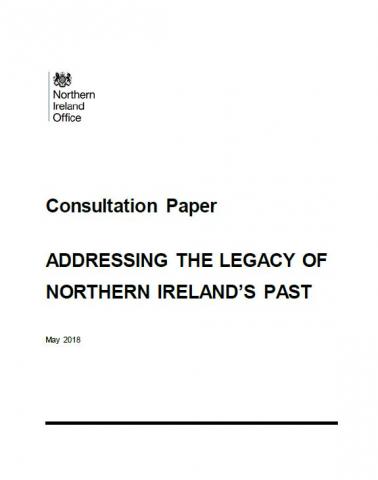 The Pat Finucane Centre (PFC) is a non-party political, anti-sectarian human rights organisation advocating a non-violent resolution of the conflict on the island of Ireland. We provide an advocacy, advice and support service to families bereaved and/ or injured as a result of the conflict, who wish to engage with statutory agencies to establish the facts surrounding the death/s of their loved one/s or injuries sustained. These include the Police Service of Northern Ireland (PSNI), the Office for the Police Ombudsman of Northern Ireland (OPONI), An Garda Síochána in the Republic, and the Coroner’s Service.  This work is part of our Recovery of Living Memory Archive (ROLMA) project funded by Peace IV and includes a three phased approach to supporting families including advocacy, engagement and story-telling. PFC also works in partnership with Wave Trauma Centre to provide health and well-being support to victims and survivors.

We currently provide this service to approximately 200 families across Ireland through four offices in Derry, Armagh, Belfast and Dublin (in partnership with Justice for the Forgotten). PFC supports families who have been bereaved/ injured as a result of state, loyalist and republican violence (including some post-Good Friday Agreement (GFA) cases). We also support families where it is unknown who was responsible for the death. Further, PFC supports victims of state mistreatment and torture, as well as a small number of individuals who are victims of miscarriages of justice.

Consultation with families in preparation for this response

In preparation for this response, PFC held a number of private meetings with victims and survivors in Derry, Belfast, Armagh and Dublin where we outlined the proposals and listened to the views of families. We did this both at the start of the summer and nearer to the close of the consultation when people had had time to reflect on what was proposed and to discuss the issues with other family members.

We also facilitated individual family meetings providing an opportunity to discuss the proposals in respect of individual cases. Some families requested assistance in preparing their own submissions and we helped them with this.

A presentation of the key issues was also distributed to families to ease the dissemination of information.

PFC engaged with officials from the Northern Ireland Office (NIO), Department of Foreign Affairs (DFA) in Dublin, the Commissioner for Victims and Survivors, and the Victims and Survivors Service. We also consulted with a number of legal academics and other NGOs providing support to victims and survivors.

PFC welcomes this consultation and believes (generally) that the proposals to address the legacy of the past are positive steps for victims and survivors, provided there is a genuine commitment from the British and Irish governments and buy-in from state, loyalist and republican actors. We believe more work is needed to build the support and trust of former combatant groups.

Throughout this engagement many families have expressed disillusionment and are sceptical that such a commitment exists. Almost all stated that they have no faith in the British government’s desire to deal with the past in an honest and open way. Families have expressed their frustration at continual delays in progressing cases and an overly legalistic and adversarial approach that has become the norm, particularly following the collapse of the Historical Enquiries Team (HET). The current mechanisms to deal with the past are piecemeal and not fit for purpose. It is imperative that the mechanisms proposed under the Stormont House Agreement (SHA) are therefore established without delay.

PFC does not purport to speak for victims and survivors. We acknowledge that the conflict has impacted every victim and survivor in an individual way and requires a range of measures that can address different needs including truth, justice, acknowledgement and reparations. The views expressed in this response are informed by, and reflective of, the views expressed to us by the families we have engaged with.

Finally, we would note that it is our view that the proposals outlined in the consultation, subject to certain concerns outlined below, could provide a framework for resolution for the majority of victims and survivors, regardless of community background, perpetrator or geographical location of individual families. Great hurt has been inflicted across all communities and across these islands and beyond. All sides were responsible for human rights abuses.  In this context we note with dismay that some have chosen to poison the debate on legacy by spreading disinformation and sometimes wild conspiracy theories, often spiced with hefty doses of sectarianism. This does a grave disservice to vulnerable individuals who have lost a loved one, whatever the circumstances of that loss.  This may well represent the last opportunity to resolve the legacy issue in an overarching manner. Should this not succeed this will have serious implications both for victims and survivors and the future of political institutions.

The full response can be accessed below.

PFC Submission to the consultation to deal with the past370.55 KB