In Their Footsteps- iMAGINE Belfast

This exhibition comprises pairs of shoes donated by families who lost a loved one during the conflict, or individuals who were seriously injured during the conflict. Each pair of shoes is accompanied by a small note about the person the empty shoes represent. What is unique about this exhibition is that all the victims here are represented equally, regardless of the status of the victim or who the perpetrator was, or whether their loved one was killed as part of a mass atrocity or in a single incident. That is why it is so powerful. There is no hierarchy of victims. 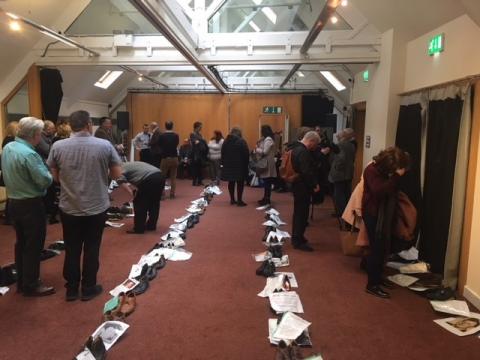 The families are united in asking for the past to be dealt with and call on the British & Irish governments to implement an acceptable and effective mechanism to deal with the past. To date the families have shown this powerful exhibition in Dublin, Belfast, London, Derry and Stormont.

Organisations contributing to this exhibition include the Pat Finucane Centre, Bloody Sunday Trust, the Ballymurphy Massacre families, people killed by the Army’s Military Reaction Force (MRF), as well as victims of the Glenanne and Mount Vernon loyalist gangs.

While the majority of the victims are from nationalist backgrounds, this is an exhibition without a specific political banner. There are victims of loyalist and republican violence and of state violence. The collection is open to anybody who wishes to contribute in memory of their loved ones.

attached is some images from the event on 12th March 2018 in the Linenhall Library, Belfast, as part of the iMagine Belfast Festival. Media from BBC Radio, UTV Live, Globo from Brazil, PBS from the USA and ARD German Television were present.