Museum of Free Derry events to mark 'Battle of the Bogside'

The Museum of Free Derry have organised an extensive programme of events to commemorate 50 years since the Battle of the Bogside. PFC are contributing two events to this programme. 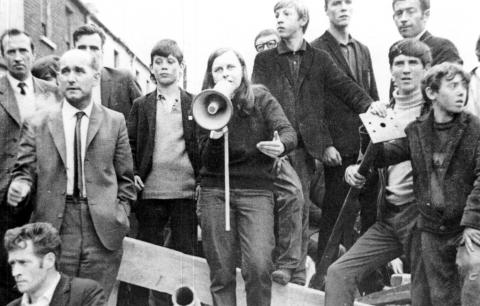 Image: Barney McMonagle, courtesy of the Museum of Free Derry

Using recently emerged photographs taken by French photographer Gerard Harlay in April and May 1972, this display highlights the experiences of children during the early years of the conflict. On display in the Museum of Free Derry from 1 August, admission free.

The launch our latest initiative, Free Derry Lives, will take place in the Guildhall’s main hall, where visitors can walk among silhouettes of the past and see and hear various stories of people, places and incidents unique to Free Derry and the civil rights era of 1968-1972. After its launch, Free Derry Lives aims to honour the contribution of those who didn’t always make the history books or the headline with a permanent and ever-growing installation in the award-winning Museum of Free Derry.  Admission free.

Curated by the Museum of Free Derry, this exhibition tells the story of the defence of the Bogside in August 1969 through a selection of stunning photographs taken during those few days. The exhibition will be sited on the fence at Pilots Row, in the area where the battle took place. On display from 8 August.

Join us as a panel of guests explore the significance of Battle of the Bogside, and its place among the international civil rights struggles of the time. Guests from Derry, Belfast and Detroit will recall the events of 1969 and their importance both then and today. Admission free.

PFC staff will provide a, at times light-hearted, at times deadly serious guide to the thousands of declassified British government archives accessed by the centre over the years.

As British troops arrived in Derry, Belfast was in embers and the conflict claimed its first child victim. Nine-year-old Patrick Rooney was shot and killed by machine gun fire from an RUC armoured car – the bullets penetrating the walls of his Divis Flat home. Fifty years after Patrick’s death, his brother Con shares their story with Derry audiences. Hosted by Irish Times Northern Ireland Correspondent, Freya McClements. Admission free.

The Museum of Free Derry and Guildhall Press are delighted to announce the re-publication of Clive Limpkin’s iconic book The Battle of Bogside, featuring many newly discovered images. The publication marks 50 years since his arrival in Derry in August 1969, in time to photograph the momentous events of that month. Join us as Clive Limpkin returns to the city and shares his experiences of documenting the conflict. Admission free. All welcome.

Wednesday 14 August - ‘In Their Footsteps’ exhibition

Exhibition of shoes representing victims and survivors of the conflict.

IF YOU ARE ABLE TO HELP AT THIS EVENT IT WOUD BE APPRECIATED!

A screening of Vinny Cunningham’s acclaimed 2004 film, Battle of the Bogside, written by John Peto and featuring many local people who played a part in these historic events. Admission free.

Museum of Free Derry presents one of Ireland’s finest musicians, Damien Dempsey, for a unique Derry performance marking 50 years since the Battle of the Bogside. Tickets available from Cool Discs, Foyle Street.

PFC Submission to the Independent Review of the HRA Panel
Family of Tobias Molloy, shot dead by a British soldier in 1972, request a fresh inquest from Attorney General of Ireland.
DECLASSIFIED NATIONAL ARCHIVE DOCUMENTS AVAILABLE TO VIEW
Glenanne - Questions and Answers
STATEMENT FROM PFC/JFF RE: "UNQUIET GRAVES" ON RTE1
Prosecutions, Imprisonment and the Stormont House Agreement
Labour calls for halt to bill shielding UK soldiers from prosecution
PFC’s submission to the United Nations Committee Against Torture