Yesterday the March for Truth took place on the 50th Anniversary of the Ballymurphy Massacre and the launch of the internment raids. It rained and poured for the duration of the march but no-one was put off. It was unusually warm under the dark clouds, with the warmth matching the more optimistic and defiant mood of the hundreds of victims and survivors and their supporters, who are still waiting for justice in relation to the deaths of their loved ones. 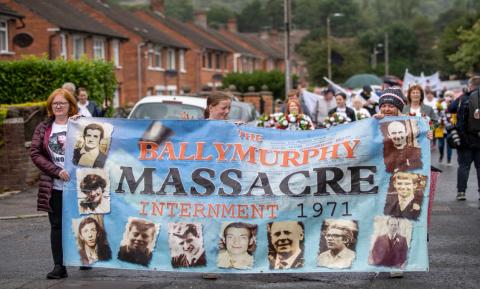 The wet and wonderful crowd left Springfield Park and walked and weaved through Ballymurphy and down to the Whiterock road into a nearby field. It was here that the families of the Ballymurphy Massacre spoke to those victims and survivors still waiting to find out what happened to their family members, still waiting for justice. In May of this year, Justice Keegan pronounced that their loved ones who died were all entirely innocent, and that 9 of the 10 were unjustifiably killed by the British Army (as Justice Keegan was unable to say who shot John McKerr). So their words had resonance and power. And not just for those present but also for those who think they can somehow keep the rest of the families who are waiting for answers quiet and cowed.

The speeches were preceded by a young girl singing ‘Something Inside So Strong’ as the families and crowd united by voice, raised their arms in solidarity, setting the mood for what was to follow. 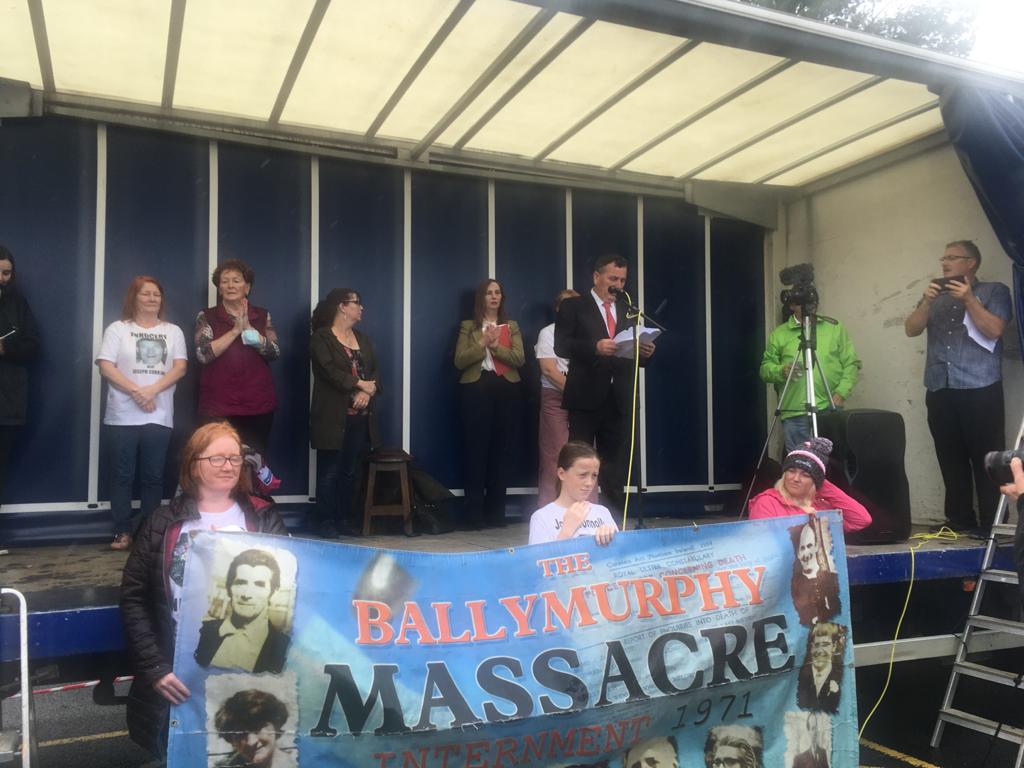 John Teggart, whose father Danny was shot 14 times and killed on August 9th 1971, asked the families still waiting for justice to keep the faith, saying ‘we will unite and fight’.

Breige Voyle, whose mother Joan Connolly was shot and left to die in the Manse field in Ballymurphy, said that the morning’s walk was different as, on the 11th of May of this year, Justice Keegan had vindicated her mummy, saying she was entirely innocent and unlawfully killed. She said to the other families…’don’t give up, we will be here to support you… there have been 22 Secretaries of State and 10 Prime Ministers in the last 50 years, they have come and gone, but the families remain, and are not going anywhere’. The crowd responded with cheers, their fighting spirits reinforced.

Carmel Quinn, sister of John Laverty, read a poem that her sister Rita wrote after the Inquest findings in May. It was a very moving piece about the 50 years of pain they had to endure until John’s name was cleared. Carmel said her heart was sore looking at all the banners  on the day, but asked the crowd to hold them high, and send a message to the British government that their tactics will not work.  Justice Keegan had found, as Carmel and her family had always known, that twenty year old John Laverty was unlawfully killed and, like all the others, was entirely innocent.

Janet Donnelly, whose father Joseph Murphy was injured and died 13 days later, was resolute in her message to the other families. ‘Murder is murder’ she said and ‘we all need our Truth, keep fighting…if it had taken us another 50 we would have done it’. The victims, survivors and supporters responded with applause and cheers.

The elderly and very refined Kathleen McCarry spoke next. Having spent nearly all of the 100 days of the Ballymurphy Inquest sitting behind Kathleen and her cousin Anne I got to know Kathleen very well. She is a lady. So if her brother was anything like her, it is totally believable when she repeatedly told the crowd ‘Eddie was a Gentleman…my brother was a gentleman…’ Her brother Eddie Doherty was found by Justice Keegan on May 11th of this year to be ‘…an innocent man who posed no threat’, and who was unjustifiably killed by the British Army. It was heart breaking to hear Kathleen describe to the crowd how their mother died 7 years later of a broken heart, and that Eddie’s wife died 9 years later leaving their children with no father or mother. And yet there she stood, defiant, fighting, elegant and extraordinary. 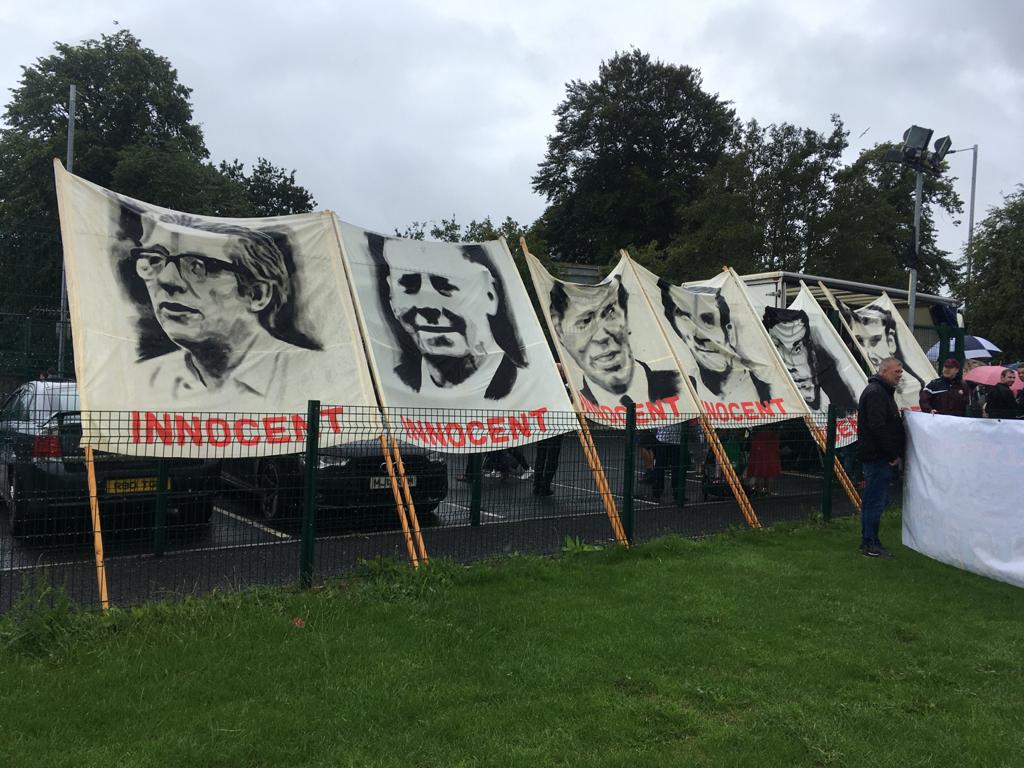 Eileen McKeown, daughter of Joseph Corr, thanked everybody who had supported the families over their long campaign, from politicians, NGO’s, community groups, to those near and far. Eileen spoke of the day to day challenges and triumphs of the 100 day inquest into the murders in Ballymurphy. Quite frankly, she said, ‘no one knows the emotions we went through walking into that courtroom every day’. She was greeted however by laughter and cheers when she said ‘who would have thought a small group of families from the North would take on the might of the British state and win…’. She described how Michael Mansfield QC wiped the arrogant grin off the face of General Jackson, who didn’t even have the decency to look at the families when he was giving his evidence.

Ciaran O’Cruadhlaoic spoke on behalf of the family of Frank Quinn. In a moving finale he said that they (British government) sent their army to’ put the croppies down’, but that the truth we all knew is now available. A final cheer went up when he said that while the ‘British waive the rules again, just like the Olympic hero this morning Kellie Harrington, we will win’. 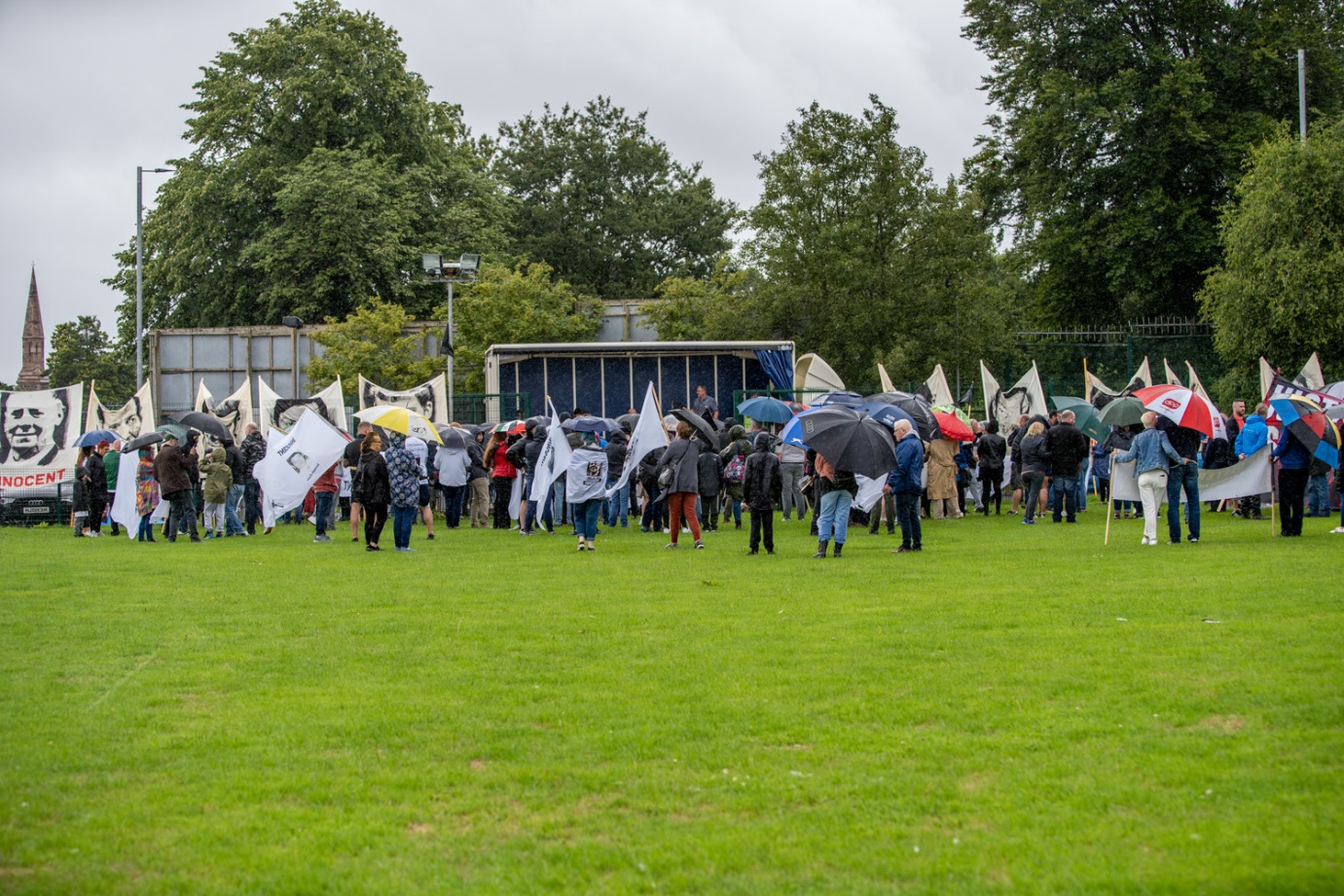 As the crowd stood soaked to their skin from downpour after downpour, relatives of the Kelly’s Bar Bombing and the Springfield/Whiterock Massacre spoke of what had happened to their loved ones and their own ongoing fight for justice. The lilt of ‘We Shall Overcome’ starting lightly from the podium lifted the somewhat sombre mood after these families had been heard.

As the whole field united in singing, on a wet, dark, cloudy, Sunday afternoon, 50 years after the British Army ran riot through the area, it was clear just how this group of people find the strength to continue their fight for justice, united in harmony by cause and consequence. 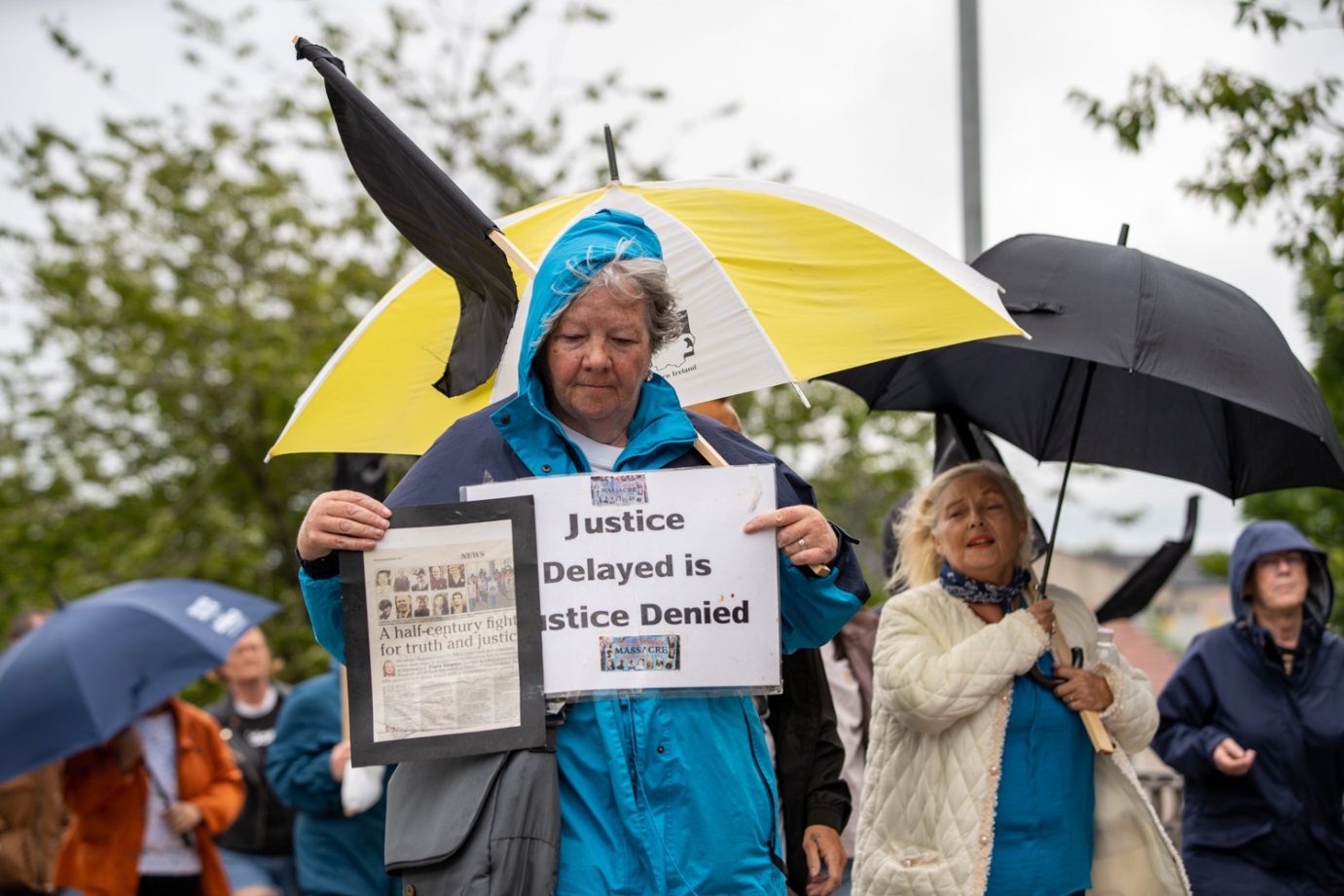