'The Impact on our Family was Colossal' Billy McGreanery

William McGreanery’s nephew says each time he is interviewed about his uncle he is transported back to his 13 year old self. “Everytime you are involved with an interview or something happens you have to take yourself back to recall when you were 13 years of age,”

William’s namesake Billy told the ‘Journal’ as the McGreanery family marked his 51st anniversary this week. “You have to. You have the thoughts and feelings of a 13 year old at that stage and it is very emotional.”

William was 41 when he was shot dead by a member of the 1st Battalion Grenadier Guards in the early hours of September 15, 1971. The respected shop assistant was killed by a round fired from a British Army sanger overlooking the junctions of Eastway, Lonemoor Road and Westland Street. He was unarmed.

Billy, who with William’s niece Marjorie Roddy and other family members has been fighting for justice for half a century, remembers his doting uncle fondly. “My mother died when I was only a year and three months old, so I was raised by my grandmother, which was my father’s and Billy’s mother. Billy was up in our house on a regular basis. My father was out at work and Billy ran a sports shop in Waterloo Street. 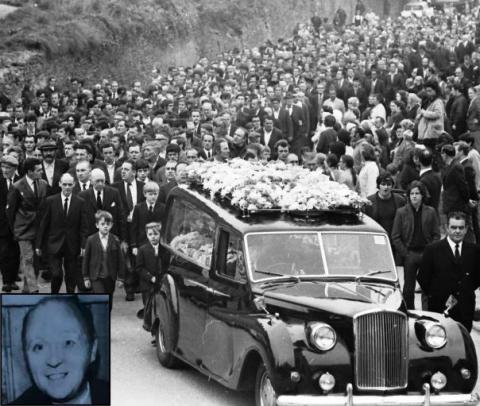 “They had half days then midweek and he would come up, and he would be up at the weekend as well. He never came empty-handed. He always brought us sweets. “It’s those wee things you remember. It was never a lollipop or Chelsea Whoppers or a 10p mix. It was Toblerone, Mintola or Rolo - the more expensive sweets. The things he would have eaten himself. He would have given those to us as well.”

The family’s indefatigable campaigning for justice over several decades has achieved several degrees of redress, particularly in relation to the slanderous and false allegations that William was armed with a rifle when he was shot dead. “My uncle was labelled a gunman from the very next morning by the red tops: ‘Billy McGrenaghan was a gunman shot dead in Derry.’ They knew within 24 hours due to forensics and statements and eyewitnesses that he was a totally innocent man.

Yet they let that trundle on for 40 years until it was refuted by the Historical Enquiries Team (HET) [a PSNI unit set up to investigate unresolved crimes committed during the conflict which was wound down in 2014] who stated he was a totally innocent man that had posed no threat,” says Billy.

The HET report which was published in 2010 was unambiguous and endorsed a truth that the family, witnesses and people from the area had known all along. It concluded that William ‘was not pointing a rifle at the soldier at the time. He was not involved with any paramilitary organisation, he was not carrying a firearm of any description, and he posed no threat to the soldiers at the observation post’. This was followed by an official apology from the Ministry of Defence.

In July 2011, General Peter Wall, the then Chief of the General Staff of the British Army, wrote to Billy and Marjorie and stated: “I would like to express my sorrow and regret for his death which, in the years since it occurred, has deprived you of an Uncle’s support and affection. “I do not believe that anything I can say will ease the sorrow you feel for what has happened, but I hope that this apology, and the findings of the Historical Enquiries Team, will be of some comfort to you.”

Then in 2013, the British Minister of State for the Armed Forces Andrew Robathan apologised on behalf of the British Government: “I am happy to repeat that apology. As for the request that it be made publicly, as I have explained, it is normally left to the family to decide whether they wish to publicise it. Some will wish to do so, but some will not. As a result of these proceedings, the apology given to Mr McGreanery’s family is now on the parliamentary record. As we know that that is the family’s wish, I am happy that it should be so.”

This week the McGreanery family confirmed to the ‘Journal’ that another milestone in their campaign for justice has been reached. Billy has disclosed that last year a soldier was interviewed under caution by the PSNI’s Legacy Investigation Branch (LIB) and that a file was sent to the Public Prosecution Service (PPS) for review in June.

“That has now been passed on to the PPS to be reviewed. I don’t know what the PPS will do, if it is a wait and see process with them, but hopefully it will go down the road that there are charges brought against this guy. That’s what I have aimed for, charges being brought,” he said.

A spokesperson for the PSNI confirmed that following a referral from the PPS, the PSNI’s LIB conducted an investigation into the circumstances surrounding the fatal shooting of Mr. McGreanery on September 15, 1971. As part of this investigation one person was interviewed and a file forwarded to the PPS for direction, the spokesperson said, adding that as this matter is now being considered by the PPS, it would not be appropriate to comment further at this time.

The McGreanerys are determined to press on with their campaign for justice for William. It is a duty Billy personally feels towards his father Dessie who lost lost his only sibling, his younger brother that morning in September 1971. “The impact it had on our family was colossal. It broke my father’s heart. My father tried his best for justice for my uncle. My father had lost the love of his life, his wife, and then his only brother and he found solace in the bottom of a bottle. Two years and three months later my father was dead. I want to finish what my father started.”

Almost ten years ago, afer the McGreanery family received the state apologies, Billy penned a poignant ode ‘In memory of Dessie and Billy McGreanery’ that laments:

‘The bullet that killed my father never pierced his skin, it killed his younger brother his only sibling; the pain he felt was plain for everyone to see, but he fought for justice for the man that meant everything to me.’ 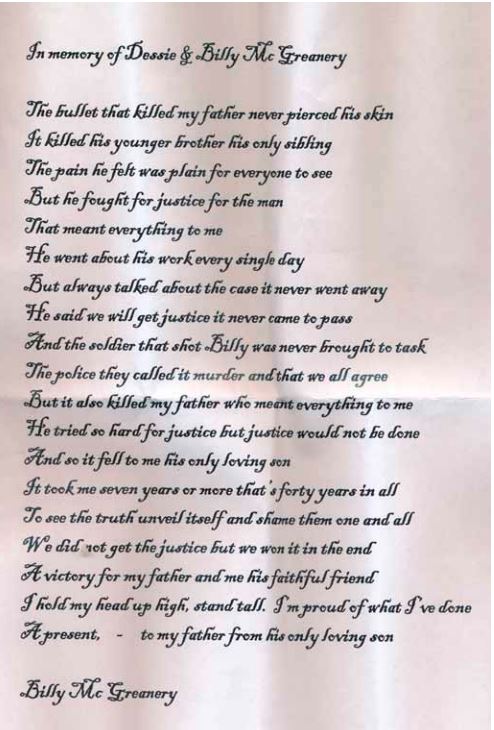 During the course of their tireless campaign the McGreanerys learned that the RUC had recommended that the soldier responsible for shooting William be prosecuted. However, this had seemingly been rejected by the Attorney General for the north at the time Basil Kelly. A minute signed by J. M. Parkin, head of C2 at MOD, which was discovered by the Pat Finucane Centre at the British National Archives at Kew mentions a conversation with Kelly in which the latter said that a charge of ‘manslaughter at most would be appropriate in the Londonderry incident’. The minute added: “Indeed, he felt that the latter probably called for no charge at all. He promised to advise us if he felt that action in either case was called for. I have no doubt that the Attorney General is doing all within his power to protect the security forces against criminal proceedings in respect of actions on duty. He must, however, preserve an impartial approach and is worried about the possibility of private criminal proceedings should he fail to act in cases where inactivity could hardly be justified.”

Billy believes the mental anguish suffered by his father in the aftermath of his brother’s death may have been lessened had he known the RUC had been willing to prosecute his killer 51 years ago, notwithstanding Kelly’s decision. “He didn’t know any of this. The fact that the RUC wanted to prosecute, the family weren’t aware of that until decades later. I think my father, if he had known that, might have taken a slightly different view on things.

Billy believes the NI Troubles (Legacy and Reconciliation) Bill which proposes a statue of limitations for all Troubles-related killings may jeopardise his family’s fight for justice if it is passed. What sort of message does this send out about British justice? he asks.

“The British will say that they have the best justice system in the world. They are crying about the Protocol - a border in the Irish Sea. That border has been in place in the middle of the Irish Sea imposed by themselves since 1969 because justice doesn’t apply here. It is the sort of justice they want to impose here. It’s like treading in molasses. They make everything slower than a snail’s pace. Ourselves and lots of other families have waited for 40 or 50 years for the truth to start coming out and this is why they are trying to pass legislation to stop all this,” he says.

This was echoed by the Pat Finucane Centre which has been supporting the family. A spokesperson stated: “This Legacy Bill will see the rights of perpetrators taking precedent over the rights of victims. They are dressing it up as a path to reconciliation, but in fact the rule of law has been completely set aside to protect those that took innocent Irish lives.”

Billy continues: “They thought that with the passage of time people would give up and soldiers would die but after a period of time they are seeing people are now actually getting to court and things are coming out that they never wanted to come out and be revealed. So their answer is to close it down. This can’t go any further. They didn’t reckon with the fact that we are a dogged race of people and don’t give up on stuff and think if we have a case it should be dealt with and that is only right and fair but the thing about it is this should have been done 50 years ago. It should have been an automatic right. It has been denied to our family and lots of families across then north.”

After 51 years the McGreanerys remain unrelenting. They have already achieved so much but believe there is further road to travel. “I set out to clear my uncle Billy’s name. And that’s done. There were apologies but they mean nothing if there is no action to back it up.” The 'Journal' asked the NIO for comment.

PRESS STATEMENT in relation to the settlement of the Campbell family Civil Case, Monday 21 November 2022
Cousin of Murder Victim, Sean Brown, speaks out against "Legacy Bill"
File with PPS after soldier interview- McGreanery Case Update
'Comfortable in his Coffin'
'I want the truth of my da's death' Jennifer Duffy
Statement from the family of John Pat Cunningham after the unveiling of a memorial to Dennis Hutchings at Palace Barracks
Kathleen Thompson Inquest Verdict
INQUEST VERDICT VINDICATES THOMPSON FAMILY