Yesterday (17.07.19) the families of Paul Whitters and Julie Livingstone met with Secretary of State Karen Bradley to discuss the closure of files relating to their loved ones.

In 1981 15 year-old Paul Whitters and 14 year-old Julie Livingstone were killed by the RUC and British army using plastic bullets in separate incidents.

Earlier this year the families wrote to the Secretary of State following the discovery by the Pat Finucane Centre that separate files under the names of Paul and Julie were to remain closed for decades. They requested that these files be released to them and asked to meet to discuss this request. 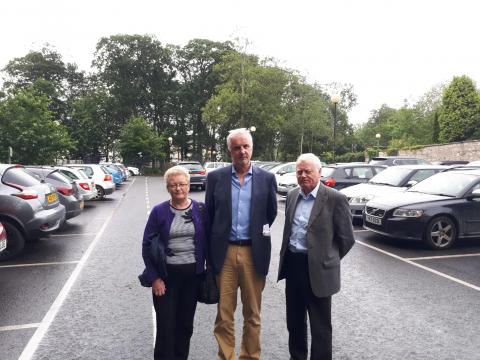 Accompanied by the Pat Finucane Centre and Relatives for Justice, Helen Whitters, the mother of Paul Whitters, with her brother, Paul’s uncle Tony Brown, and Robin Livingstone, brother of Julie met with Karen Bradley and her team of advisors yesterday morning.

The meeting was deeply dissatisfactory.

Mrs Bradley, with her team of advisors, outlined the circuitous decision making that results in files relating to children killed by the state being withheld from public view until the direct living relatives of those children are likely to have passed away.

The families were told that there is nothing the secretary of state can do to intervene and release the files to the families without the families engaging in a process of seeking the files under a Freedom of Information request, as the files are the property of the National Archives at Kew, London, and no longer anything to do with her or her office.

The advisors contradicted each other on this point. The people who made that decision are apparently so over worked with files they could not even be asked why they made this decision, as they could not possibly remember, and neither is there a discoverable audit of this decision making. The families have made clear that this is not credible and there is no question that they wish to see written names of living people in the files.

This scandal obviously points to a wider issue that files can be closed, for reasons unrecorded except in the broadest of terms, passed onto the National Archives, where they then can be kept secret, but unreleasing them, even to the bereaved families of children killed, is much harder than making them secret.

“So the Secretary of State can’t tell us why the files are closed because the NIO has marked the files secret and because they are secret they claim not to know why they have marked them secret! The circular stupidity of this argument has left us speechless. This is about my son who was shot at almost point-blank range at 15 years of age and about the cruel death at 14 of Julie Livingstone. They were just children.“

It is worth noting that in 2011 the Historic Enquiries Team collapsed because of the illegality of investigations into state crimes and in 2014 the British Government was one of the signatories to the Stormont House Agreement legacy mechanisms. Notwithstanding the contemporaneous concentrated debate on how to ensure our post conflict society has a process which delivers truth, justice and acknowledgement to victims and survivors in a human rights compliant way, the mandarins with short memories in the NIO were in parallel engaged in a seemingly duplicitous process making files secret, in a one way system which side stepped transparency, scrutiny or fairness.

The families have asked to see in writing the full legal framework in which these decisions have been made, continue to operate and to which the Secretary of State informs them that she cannot intervene to ensure that the files are released to the families.

They will then consult to decide how to progress on this extraordinary vista of state impunity.