The Pat Finucane Centre recently secured funding from the European Union's Peace IV Programme to support our Recovery of Living Memory Archive (RoLMA) project. To celebrate, we invited the families we work with for an afternoon of speeches, food, and community. 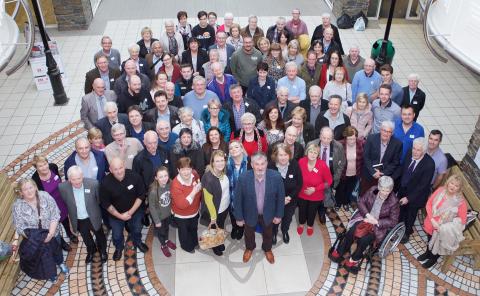 The Pat Finucane Centre family day took place in Derry on 14th October. Well over 100 people took part in the event. A variety of experiences were offered throughout the day, each one highlighting the work of the PFC.

Families first had an opportunity to view the 'In Their Shoes' exhibition, in which the shoes of many killed during the conflict were laid out throughout the building. This powerful exhibit also included a brief summary or story about the victim,  written by one of their loved ones. It was a good opportunity for people to reflect over a family member and see the shoes of others as well.

Next followed a period of speeches, the first being given by Chairman Tony Brown, who welcomed all who had come, including the many who had travelled several hours to get to Derry. Before introducing the next speaker, Oliver Wilkinson-the Chair of the Victims and Survivors Service-Tony thanked the many employees of the PFC for their tireless and dedicated work.

After Oliver spoke about the importance of the funding the PFC had received, and briefly outlined the good use it would be put to, family members Tracy Mulholland and Charlie Agnew each gave speeches. Tracy spoke about the long process she and her family have gone through. She outlined that often times there are stretches of very hard days but with perseverance and belief along with the support of the PFC, those hard days along the road begin to become outnumbered by the good days. Charlie echoed that sentiment, adding that the PFC staff have kept him grounded and focused upon his final goal of achieving justice for his uncle, John Pat Cunningham. He spoke too of the struggles to trust the legal process along the way, but said that prosecution continued and that he would continue to keep pushing onward.

After Tracy and Charlie, Paul O'Connor of the PFC detailed the importance of the RoLMA project as well as the other works of the PFC. He highlighted the partnership with Wave Trauma Centre, with whom the PFC had established a partnership with, in order to focus on the health and well-being of clients. Wave provided two of their massage therapists for the family day as a taster of the complimentary therapies available to victims and survivors. Finally, Susan McKay, author and journalist delivered a moving poem about a victim of the Troubles, Susan spoke of the good experiences she's had with the people of the PFC as well as the immense strength she's seen exhibited by the family members in the room time and time again. Hers was a fitting note to end the speeches on.

After the powerful speeches, food was served. Families were able to eat, socialize, and take in a slideshow featuring the events the PFC has been involved in over the years. Spanish dancers even made a surprise appearance to the delight of the crowd. The lighthearted affair was an excellent addition to the Family Day, as good conversation and good food was had for well over an hour.

After taking a group photo, many of the families made their way to the Museum of Free Derry for an exclusive tour of the new building and all it has to offer. All in all, the Family Day was a resounding success, thanks to the PFC employees who worked hard to make it happen and to the many families who showed up and participated.

Click below on the Slideshow of key PFC events over the last few years.