The UDR: A potent weapon in Britain’s ‘dirty war’ in Northern Ireland

For some, the conflict in Northern Ireland was characterised by an impenetrable jumble of abbreviations. Amid the alphabet soup of loyalist paramilitary groups – the UVF, LVF, UDA, etc – some might mistakenly include the UDR. But the Ulster Defence Regiment was in fact a fully-fledged element of the British army.

Lauded by prime ministers and garlanded by royals, the UDR was at one time the largest infantry regiment in the British army. It also spent longer on continuous active duty than any other unit in the army’s long and violent history.

From its formation on April 1st, 1970, the UDR was a very different type of army regiment. Formed from the ashes of a discredited sectarian force, the notorious B Specials, the UDR was perhaps doomed from the start.

The French political scientist Anne Mandeville writes that it represented “a sort of curious paradox: a militia force [the B Specials] is dissolved in general opprobrium. What do we choose to succeed it? Another militia force.”

She describes the UDR as “a kind of monster”, simultaneously “presented as an arm of the State but deeply in solidarity with the Protestant community, ‘integrated’ into the British army but separated from it organically, geographically and by its specificity”.

This “specificity” was that it was reserved for use solely in Northern Ireland and, tellingly, away from nationalist or Catholic areas such as west Belfast, Derry city and south Armagh.

It was a classic militia regiment,  part of a long tradition of the use of such forces by the British empire. Regular army elements stationed in Northern Ireland referred to the UDR as “native levies” – terminology usually reserved for local troops raised in, and for suppression of, “the colonies”.

For unionists, service in the UDR was a noble act and often a family tradition. Many ordinary and decent people wore a UDR uniform. Thousands of people living in Northern Ireland will have relatives who did so.

For nationalists, an encounter with the UDR at one of its roadside checkpoints was frequently hostile, often brutal and sometimes fatal. Many recall approaching the red torchlight swung by a soldier in the road and hoping it was the regular army ordering them to halt.

In one notorious incident, the Miami Showband stopped their tour van at what they thought was a British army checkpoint. Instead, it was a trap set by members of the Glenanne gang, serving (but off-duty) UDR soldiers who were simultaneously members of the loyalist paramilitary Ulster Volunteer Force (UVF). Three of the band members were murdered that evening and two were seriously wounded. The killers were UDR by day, UVF by night.

The extent of weapons losses from UDR armouries, or from the homes of UDR personnel, amounted to a steady flow of military equipment straight into the hands of loyalist gangs

Official references to collusion between state forces and loyalist paramilitaries can be found in reports dating from as early as 1971. Reference to the theft of a rifle from the UDR on September 2nd, 1971, appears in a note about weapons losses forwarded, in 1972, to the office of a British under-secretary of state – that is, to ministerial level. Internal British army documents throughout the 1970s used the word collusion routinely and repeatedly.

The extent of weapons losses from UDR armouries, or from the homes of UDR personnel, amounted to a steady flow of modern military equipment from the British army straight into the hands of loyalist gangs.

A 1973 military intelligence document, titled Subversion in the UDR, found that 5 to 15 per cent of the UDR members had paramilitary links, with “widespread joint membership of the UDA” – referring to the paramilitary Ulster Defence Association. In fact, in many areas UDR commanders considered dual membership normal.

The same report stated that some soldiers were “undoubtedly living double lives” and that the primary loyalty of many of its members was to a concept of “Ulster” rather than to the British government.

It is striking, when one examines these official documents from the 1970s, to see echoes today in the infiltration by violent far-right groups of the police and military in Britain, the US and elsewhere.

Most significantly, the Subversion in the UDR report found that the UDR was the single “best” source of weapons for loyalist gangs, and their ‘”only significant source of modern weapons”.

Files from 1974 reveal that the Northern Ireland Office (NIO) was consulting representatives of all loyalist paramilitary groups on the future direction of the UDR, leading to the bizarre situation where loyalist extremists were influencing British military policy.

Lest we think such collusion was confined to the past, we should recall that at the beginning of 2021 the NIO was meeting loyalist extremist groups to discuss British foreign policy (Brexit).

In 1978, investigations into the UDR’s Tenth Battalion (10 UDR), the Belfast city battalion, concluded that two specific companies of 10 UDR were “the supply and financial support elements for local paramilitary organisations”.

The investigations revealed that at least 15 members of 10 UDR based at Girdwood Barracks in north Belfast, who had been in the battalion over a period of years, were also members of the loyalist paramilitary UVF.

It is significant that most of the attacks committed by the Shankill Butchers took place within one square mile of Girdwood Barracks, the base of 10 UDR

That the UDR served a vital function for the British state is evidenced by its tolerance of rampant criminality within its ranks. Between 1985 and 1989, UDR members were twice as likely to commit a crime as the general public. The UDR crime rate was 10 times that for police officers in the RUC and about four times the British army rate.

By the early 1990s, around 120 members or former members of the regiment were serving prison sentences for serious crimes, and 17 had been convicted of murder.

There is mounting evidence that the NIO, the RUC and the prosecution service colluded in a consistent policy of withholding the UDR identity of soldiers who were being prosecuted for serious crimes. In several such incidences, documents from the NIO’s Law & Order Division state that “the Police will not be referring to his membership of the security forces”.

This was not just a kind of ad hoc, case-by-case decision, taken at a junior level, which one might expect to result from the odd “bad apple” in the ranks.

Imagine, in a modern context, if a US state trooper was in court for invading the US Congress, and his official identity was deliberately hidden from court by elements of the state. This was the case for numerous cases of former UDR members who were before the courts.

We are approaching the 30th anniversary of the regiment’s dissolution. And yet truths continue to emerge that unlock closely guarded state secrets about the British “dirty war” in Ireland, not least the role of the UDR.

Researching my new book, UDR Declassified, over the past two years, I was able to see and read what 10 Downing Street, the NIO and the British Ministry of Defence knew (and said) about the controversial regiment in more than  200 declassified documents recovered from the British National Archives.

Exposing such truths, using the very words of those in authority, is not “rewriting” history, it is correcting it.

UDR Declassified, by Micheál Smith, is published by Merrion Press. 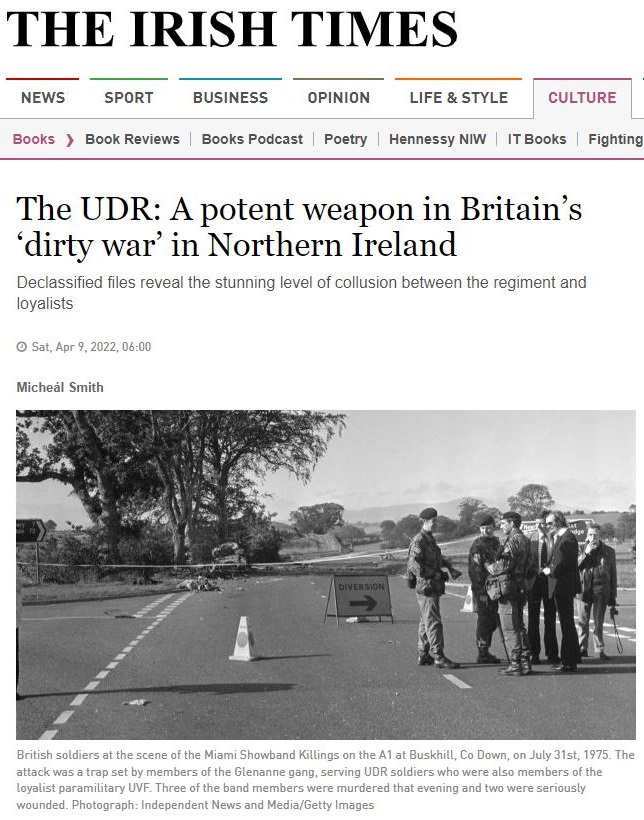