A powerful programme of talks, screenings and events has just been unveiled by the Bloody Sunday Trust and Pat Finucane Centre for the 47th annual Bloody Sunday Commemorations later this month.

Among this year’s events will be a special focus on Palestine’s Great March of Return with Dr Asad Abushark for the Annual Bloody Sunday Memorial Lecture on 25 January, a talk on Brexit and Irish Rights by Prof. Colin Harvey, Queens School of Law, on 28 January, and a unique perspective on the challenges of prosecuting British soldiers by two bereaved families currently involved in the process on 27 January. 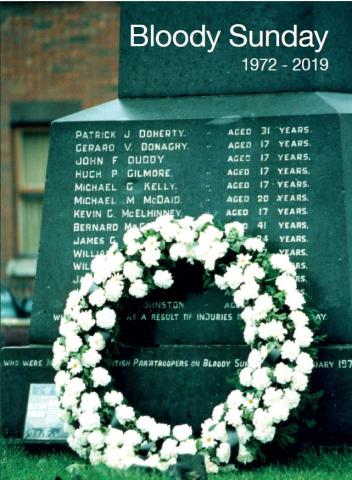 A particularly poignant event will take place at 3pm on the anniversary of Bloody Sunday itself - 30 January - when several deeply personal items from the late Bishop Daly’s Estate will be officially presented to the Museum of Free Derry.

On Wednesday 23 January, the Museum of Free Derry will launch their exciting new multi-media project ‘Free Derry Lives’ that aims to record the names, lives and contribution of local individuals - well known or unknown – who played a role in the creation and maintenance of Free Derry. On Monday 28 January, an invited panel of guests will discuss the concept of a Museum of British Colonialism, while writer Paul Gosling will discuss his new book and the case for the reunification of Ireland on 29 January.

As well as this, the museum and Nerve Centre will host several compelling film screenings as part of this year’s programme, including Anne Crilly’s documentary on 30 January about Kathleen Thompson, the Derry mother-of-six shot dead in her own back yard by the British Army in 1971, and ‘Nae Pasaran’ on 26 January, telling the story of Scottish factory workers who took a stand against Pinochet’s regime, including a Q&A with the film’s director, Felipe Bustos Sierra.

The Nerve Centre Cinema will be the venue on 26 January when ‘After the Headlines’ recalls the scandal of the 1981 Stardust nightclub fire that killed 48 young people, Creggan’s Hive Studio will screen ‘The Ballymurphy Precedent’ on 31 January, followed by a preview screening of ‘Unquiet Graves’ at the Nerve Centre on 1 February, exposing the British government's role in the murder of over 120 civilians by the Glenanne Gang.

Light relief is promised with The Playhouse presenting ‘The Bog Couple’ from 30 January until 2 February at the Millennium Forum. Think ‘The Odd Couple’ meets Derry Girls!

An outline of our events programme is included below. For more detailed information on all this year’s Commemoration events - including the 2019 Anniversary Mass, Morning Service and Minute’s Silence – see the programme, visit the museum in Glenfada Park or go online at: www.museumoffreederry.org.

*All Week – In Their Footsteps Campaign – Family-led exhibition of Shoes representing the dead and injured.

Join us as we launch an exciting new multi-media project that aims to record the names, lives and contribution of local individuals - well known or unknown – who played a role in the creation and maintenance of Free Derry.

Annual Bloody Sunday Memorial Lecture with Dr Asad Abushark, International Coordinator of Palestine’s Great March of Return. Almost 200 Palestinians were shot dead by Israeli military forces during the powerful wave of protests in the region last year known as the Great March of Return. Dr Abushark has lectured and written extensively on the Palestine question and the right of return. He is a visiting Professor of Translation and Linguistics from Gaza University’s Communication and Language Faculty, and the official spokesperson of University Teachers’ Association – Palestine. Chaired by Danny Morrison.

This powerful RTE documentary shines a light on the Stardust families and their Justice for the 48 campaign which seeks a fresh inquest into the Dublin nightclub fire that killed 48 young people and injured hundreds more in 1981. Followed by Q&A with Stardust families.

Co-sponsored by the Trades Council, Nae Pasaran tells the story of how a group of ordinary Scottish factory workers took a stand against one of the most repressive dictatorships of the 20th century. Forty years after their defiant stand in protest against Pinochet's Air Force in Chile, these pensioners discover the dramatic consequences of their solidarity. Introduced by Liam Gallagher, Chair of the Trades Council. Followed by Q&A with director Felipe Bustos Sierra and a Chilean Reception with authentic wine and nibbles. Admission free.

Two former British soldiers currently face prosecution in the courts in respect of the killing of Joe McCann in 1972 and a third soldier is being prosecuted in connection with the shooting of John Pat Cunningham in 1974. Both families have agreed to share their experiences with other families. The intention is NOT to discuss the legalities of the actual cases - this must be left to a court of law - but instead to give a family perspective on the highly unusual circumstances of former soldiers in the dock. Chaired by Paul O’Connor, Pat Finucane Centre.

Colin Harvey is Professor of Human Rights Law in the School of Law, Queen’s University Belfast and a Fellow of the Senator George J Mitchell Institute for Global Peace, Security and Justice. The impact of Brexit on human rights and equality here in the north is gaining increased attention, and rightfully so, considering the repercussions it could have. Professor Harvey will discuss the BrexitLawNI project, examining the consequences of Brexit and the broader malaise in the law and politics of the north, where there is currently no government.

How should the legacy of British Colonialism be remembered, taught and discussed both here and in Britain? Guests including Olivia Windham Stewart from the Museum of British Colonialism, Jim Waller, Cohen Professor of Holocaust & Genocide Studies, Keene State College, and Paul O’Connor, Director of the Pat Finucane Centre for Human Rights, discuss these issues after a screening of Operation Legacy, which outlines the struggle of tortured Mau Mau veterans for justice and compensation. Chaired by Bill Roulston.

The PFC’s Legacy of Colonialism exhibition will also be on display.

In Conversation with Paul Gosling on the Reunification of Ireland

Writer, broadcaster and researcher Paul Gosling will discuss his latest book, A New Ireland - A New Union: A New Society: Social, Political and Economic Proposals for a New Ireland. The book considers the prospect for Irish reunification in the context of the impact of Brexit and demographic changes in the north, alongside the economic strength and increasing social liberalism of the Irish Republic. Chaired by Garbhan Downey and sponsored by Creggan Enterprises.

A presentation to the museum from the estate of the late Bishop Edward Daly, who bequeathed the holy stole worn during Bloody Sunday in 1972 alongside a framed photograph of the boy he tried to help that he kept in his office for four decades after the massacre.

On 6 November 1971, Creggan mother-of-six Kathleen Thompson was shot dead in her own back garden during a British Army raid, her 12-year-old daughter later discovering her body. Only now is an inquest underway - over 47 years after their mother’s murder. Introduced by director Anne Crilly and followed by a Q&A with some of Kathleen’s children.

Set in the Rossville Flats in the Bogside in 1976, The Playhouse production of ‘The Bog Couple’ (inspired by Neil Simon’s The Odd Couple) is back by popular demand! The laugh out loud comedy written by Liam Campbell and directed by Kieran Griffiths will return to a bigger stage. Fate and a couple of failed marriages have crashed two men together under the same roof in the Rossville Flats in the midst of The Troubles – in what can only be described as the mismatch of the century. Starring local actors Pat Lynch and Gerry Doherty. www.millenniumforum.co.uk

Another chance to see this powerful new documentary detailing the August 1971 massacre.

Callum Macrae pulls back the curtain on a tragic coverup in British-Irish history.  Just six months before the Bloody Sunday killings by the British Parachute Regiment, the same regiment was responsible for the targeted shooting, over three days, of 10 innocent Catholic civilians in the Ballymurphy housing estate in West Belfast.

This critically acclaimed film details the British government's role in the murder of over 120 civilians in Counties Armagh, Tyrone and the Republic of Ireland during the 1970's by the group now known as the Glenanne Gang. After years of painstaking work by human rights groups The Pat Finucane Centre (PFC) and Dublin- based Justice for the Forgotten (JFF), and the subsequent release of Anne Cadwallader’s best-selling book, Lethal Allies, the scale of collusion between the British government and loyalist death squads has now become apparent to all. Followed by Q&A with director Seán Murray.