PFC's annual newsletter outlining the work of the PFF/ JFF over the last twelve months. 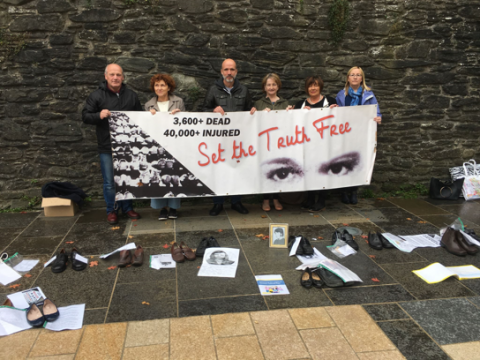 There has been excitement, achievement and frustration in almost equal measure for The PFC and the families for whom we work in 2018.

It was, without doubt, exciting to see the feature documentary Unquiet Graves (based on the murderous activities of the "Glenanne Gang") finally being screened – although it will be February 2019 before it goes on general release internationally.

Its director, Sean Murray, has been unstinting in his hard work to ensure the film is of the highest quality and will reach a huge audience in the New Year. The bereaved families were all greatly impressed at their sneak preview of the film in June.

Exciting too that The PFC’s new publication The Impact of the Parachute Regiment in Belfast 1970-1973, published in August, has virtually sold out and will be reprinted in 2019.

Similarly, Lethal Allies (also on the "Glenanne Gang") was reprinted but has sold out yet again and will be reprinted in 2019.

A massive achievement has been exhibiting the In Their Shoes project in so many places throughout Ireland including Galway, Belfast and Derry. Our new Legacy of Colonialism exhibit has also travelled near and far.

One of the downsides of 2018 has been the draining and difficult work of gathering family views on the proposals in the Stormont House Agreement. We prevailed upon over 60 individual families to spend hours considering the pros and cons of the proposed institutions.

The Dublin/Monaghan bombing families are still no closer to getting London to open the files on the atrocities so they can discover the truth.

But the end of the year saw families from Dublin, Derry, Scotland, Belfast and elsewhere gather together at the Duncairn Centre to draw strength from each other and reflect on another year of slow but solid progress towards our aim of truth, justice and accountability to underpin the peace.

Family of Tobias Molloy, shot dead by a British soldier in 1972, request a fresh inquest from Attorney General of Ireland.
DECLASSIFIED NATIONAL ARCHIVE DOCUMENTS AVAILABLE TO VIEW
Glenanne - Questions and Answers
STATEMENT FROM PFC/JFF RE: "UNQUIET GRAVES" ON RTE1
Prosecutions, Imprisonment and the Stormont House Agreement
Labour calls for halt to bill shielding UK soldiers from prosecution
PFC’s submission to the United Nations Committee Against Torture
PFC's latest submission to the Committee of Ministers