The family of a Derry mother-of-six, shot dead in her own back garden, says Britain’s Ministry of Defence is treating them – and an inquest into her death - with complete contempt.

Even the Coroner hearing the case has expressed deep disappointment at the MoD’s failure to confirm the identities of soldiers who were in Creggan on the night she was shot. – four months after the information was requested. Not a single soldier has been identified to the Coroner. 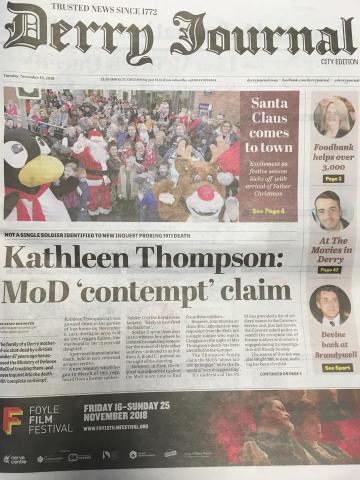 Kathleen Thompson, aged 47, was killed in November 1971 as the British Army raided homes on the Creggan Estate.

A new inquest began work last March with “Soldier D” from the Royal Green Jackets (RCJ) accepting he was possibly the soldier who shot Mrs. Thompson. Soldier D was NOT identified by the MoD but had instead made himself known to the PSNI.

Her family do not wish the inquest to end, however, without a greater effort to locate Soldier’s A, B and C who were with Soldier D at the time the fatal shots were fired.

Four months after the family and their lawyers outlined the search avenues they wanted the MoD to pursue, nothing concrete has been received from London, enraging the Thompson family.

The PSNI has provided a list of soldiers’ names to the Coroners service and, last month, the Coroner asked the force to search the complete list of former soldiers with whom it engaged during their investigation into Bloody Sunday.

The source of this list was also sought but, to date, nothing has been clarified.

Moreover, the Coroner has also made a previous order for the MoD to ask the Directorate of Judicial Engagement Policy (DJEP) for information and the source of their information on the Royal Green Jackets.

Astoundingly, Counsel for the MoD has informed the court they sent correspondence to the wrong address for DJEP (another functioning arm of the MoD - not a separate institution).

The Thompson legal team and family members say they this is farcical and far-fetched. Particularly as Matthew Lewsley, the head of the DJEP, appeared at the inquest earlier this year.

James Kinchin-White, a former RGJ soldier, has provided a list of names to the Thompson legal team which they sent to the MoD, yet the MoD have yet to come back with further information arising from inquiries.

Counsel for the Thompson family said in court last week that they find the MoD response “completely inadequate”.

The Coroner also says she is “disappointed” that she has no answers that she needs “fully articulated written responses towards the issues raised”.

Meanwhile, the Thompson family are questioning the credibility and legality of the MoD’s abject failure to engage with the inquest and are considering other legal avenues if sufficient responses are not received by the next preliminary hearing on Monday November 19th.

The Pat Finucane Centre (who are assisting the Thompson family) said that effective, human rights compliant investigations are the law and protected under Article 2 of the European Convention of Human Rights.