Sean Dalton died when an IRA booby trapped bomb exploded on 31st August 1988 in Kildrum Gardens in Creggan, Derry. Sheila Lewis was also killed instantly, and Gerard Curran died of his injuries 7 months later. They had gone to check on a neighbour who hadn’t been seen in a few days, and on entering his flat, triggered a bomb that ultimately lead to three deaths. Because of the circumstances of the case, it became known locally as the “Good Samaritan” case. 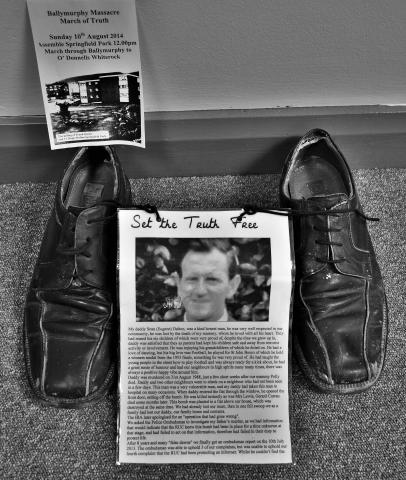 In 2005 the Dalton family approached the Pat Finucane Centre and agreed to file a complaint with the Police Ombudsman. The family believed that the RUC knew about the bomb in advance and had allowed three civilians to die.

The Dalton family have always asserted the following:

Findings by the Police Ombudsman of Northern Ireland -July 2013

In July 2013 the Police Ombudsman of Northern Ireland (OPONI), Dr Michael Maguire, published his findings in respect of their 8 year investigation[1].

The report by the OPONI substantiated the Dalton family’s complaint in a number of areas. It confirmed that

The Dalton family believe that the RUC allowed this to happen because they were protecting an informant. The Police Ombudsman stated that he found no evidence that Police acted to protect an informant. However, the Ombudsman was hindered in his investigation of this issue by the non-co-operation of senior former officers both within the District Command and Special Branch. The report also states that documents and minutes of meetings were missing for reasons that have not been explained to the investigation.

Following the publication of the OPONI’s report, the Northern Ireland Retired Police officer’s Association (NIRPOA) issued a lengthy rebuttal challenging both the substantive findings of the OPONI report and also the legal remit of the OPONI to make findings that Article 2 of the ECHR had been breached[2]. They also asserted that the wrong test had been applied by the OPONI in reaching his determinations in relation to Art. 2.

In the rebuttal, NIRPOA refer to information relevant to the case that was not shared with OPONI. They also make the following statement

“i) Nevertheless despite any reservations in the particular circumstances of this incident Special Branch’s first required objective would have been to consult with the agent from whom the intelligence about the booby trap device first originated. ……. It would also have been vital in terms of the agent’s personal security to obtain a perspective on the potential threat to their life that may be inherent in any forthcoming overt police response or public disclosure of information. (Emphasis added)

j) This would have been a recognised and approved procedure and would have been carried out in the knowledge that the device, suspected to be in place, had been deployed as a booby trap bomb from the date on which the abandoned car was reported to the police, namely 25th August 1988, six days before and as it had remained stable throughout that period it could be reasonably assumed, on the basis of knowledge of previous attacks and PIRA’s bomb making technical expertise, that it would continue to do so.”

This statement by NIRPOA confirms, in our view, the existence of an informer. It also confirms that the agent was being protected resulting in the deaths of three people.

In January 2014 the NIRPOA attempted to judicially review the findings and remit of the OPONI in respect of the “Good Samaritan” case, but their application was out of time.

As a result of the failed judicial review by NIRPOA, correspondence came to light during discovery between then PSNI Deputy Chief Constable Judith Gillespie and the Police Ombudsman.  In a letter dated 31st May 2013, DCC Gillespie stated

“There will clearly be a difference of opinion between that expressed in your report, that police ought to have known that a bomb was in the vicinity of 38 Kildrum Garden, and the opinion held by PSNI that this only became clear with hindsight. Whilst this is not a comment on factual accuracy, it goes to the heart of your findings.”

This was in contrast with the public statement issued by Gillespie following the publication of the OPONI report which states:

“For police officers, whose duty it is to protect life, there is a deep and sincere sorrow for the loss of the lives of Eugene Dalton, Sheila Lewis and Gerard Curran. To their friends and families, on behalf of the Police Service I am truly sorry for the loss of their loved ones.”

The rejection by the PSNI of the OPONI findings sought to undermine the Office of the Police Ombudsman, and demonstrated the unwillingness by the PSNI to face the failings of their predecessors within the RUC.

Failure to grant a fresh inquest

·         The family applied to the Attorney General (AG) seeking a fresh inquest;

·         This application was rejected as the AG argued that the OPONI report fulfilled the state’s Article 2 procedural obligations;

·         Given the limitations of the OPONI’s investigative powers (including the inability to compel co-operation from retired police officers), and the new information relating to the protection of an “agent” referred to in the NIRPOA’s statement, the family has not yet had their Art. 2 rights to an effective, independent investigation of the event’s concerning the death of their father realised;

·         Judgement by Mr Justice Deeney on 28th March 2017 upheld the decision-making process of the Attorney General and dismissed the application by the Dalton family;

·         The Dalton family are taking civil action against the Ministry of Defence and the PSNI;

·         The PSNI have provided discovery to the court, however OPONI have confirmed that materials are missing;

·         OPONI cannot hand over the materials directly as it is technically “PSNI” material;

·         PSNI are arguing that they need to have material returned to them by OPONI, redact the material & then provide it to the court/ plaintiffs;

·          The Dalton family is judicially challenging the on-going delay and failure to provide materials by the PSNI.

·         The Dalton family applied to the European Court of Human Rights in 2015 asserting a breach of Article 2 with respect to their father’s right to life, and their right to an effective, independent  investigation;

·         The application was unsuccessful as the family had not exhausted all their domestic remedies, namely they had not yet judicially reviewed the failure to grant a new inquest or to challenge the failure of the state to reinvestigate since the publication of the OPONI report;

·         As stated above, the family is appealing the High Court judgement from March 2017 regarding the AG’s decision later this year. If unsuccessful the family can resubmit their application to the ECtHR to examine the case.

The Dalton family continue to be denied information relating to the circumstances of their father’s death. They believe that the desire of the state to protect an agent was put above the right to life of their father, Gerard Curran and Sheila Lewis.

The failure of the PSNI to accept the OPONI’s findings, coupled with the failure to provide relevant documentation to the High Court continues to undermine public confidence in policing.

The Dalton family is seeking acknowledgement and accountability from the state regarding their failure to uphold their duty to protect life. The onus continues to fall to the Dalton family, and hundreds of other families whose human rights were abused during the conflict, to pursue justice and seek the truth. This should not be the case.

PFC continues to support and advocate on behalf of the Dalton family and 220+ other families bereaved during the conflict.