'I want the truth of my da's death' Jennifer Duffy

No one was brought to justice for the death of Harry Duffy. Now his family fear new legacy legislation means no one ever will. 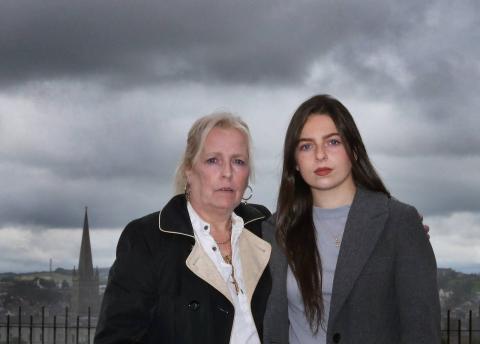 For Harry Duffy, it was love at first sight.

Harry and Bridie married and made their home in Creggan, where they had seven children; their daughter Jennifer recalls “for all we didn’t have much, we had a really happy childhood ... they were great together”.

When Bridie died unexpectedly of a heart attack, Harry was “broken-hearted” but devoted himself to raising their family.

Known in Derry as “Harry Dundalk”, after his home town, Jennifer recalls how he would “take us out on picnics, play rounders, taught me to swim in the reservoir. He used to whistle and when he was on his way home you could hear him a mile off, whistling”.

In May 1981, the 44-year-old was shot and killed by a soldier who hit him in with the head with a plastic bullet during rioting in Derry which followed the death of the hunger striker Patsy O’Hara. Duffy had been searching for Jennifer, then 11 years old, who had gone down to watch the riots. “He was out looking for me. That night when I came home, my Daddy wasn’t home yet. I knew there was something wrong, because he would never have stayed out of the house.”

Later she was woken from bed and her uncles broke the news. “They told me my Da was shot, they didn’t tell me he was dead, but I knew in my heart and soul. I said, ‘he’s dead, isn’t he’?”

Jennifer and her siblings never returned home. Now orphans, they were split up; they were sent to Catholic church-run children’s homes and fostered out to relatives.

I know they’ll never be punished for what they’ve done, so come out and tell the truth

“It took us out of a happy, loving home ... then not to apologise, not to say nothing, to think it’s okay for us not to know the truth, it’s not okay, it’s not okay one bit. To say, ‘we’re closing the door in your face’, it’s not okay.

“I was robbed of the relationship with my grandfather, and my mother was robbed of the person she could have been,” says Jennifer’s daughter Mallaídh Duffy (20). “They call us UK citizens, but they treat us differently. At the end of the day, murder is murder, wherever it happens.”

The Duffy family could stand for so many others who lost loved ones in the Troubles and who now fear the UK government’s new legacy legislation, introduced in June, will mean an end to their chances of finding out what happened to Harry, or of holding anyone to account.

The Northern Ireland Troubles (Legacy and Reconciliation) Bill will create a new truth recovery body which will offer immunity from prosecution to perpetrators who co-operate with its inquiries. It will take over responsibility for all Troubles inquiries and other avenues of criminal and civil investigation and inquests will be closed down.

The proposals have been condemned across the board, including by Northern Ireland’s five main political parties, victims and human rights groups, as well as by the Irish Government. The Bill has also been condemned by groups in Britain, the European Union and US.

In a statement to The Irish Times, the Northern Ireland Office (NIO) said the Bill would “deliver a significantly different and improved approach” to addressing legacy issues which would “provide more answers for families and help society to look forward.

“This legislation seeks to strike the right balance between a clear focus on information recovery and accountability, while ensuring that those who do not co-operate with the independent Commission will remain liable to prosecution should sufficient evidence exist, or come to light,” a NIO spokeswoman said, adding that the UK government would “continue to seek constructive engagement with all stakeholders, including families” as the Bill progresses.

The day it was introduced in Westminster, lawyers scrambled to lodge papers in at least 100 cases in an attempt to avoid the block on civil cases; that of Harry Duffy was among them.

Their hope, says Sara Duddy from the Pat Finucane Centre — which supports the Duffy family — is that it might provide them with some information about what happened to their father.

“At every single step they have been blocked and knocked back,” she says. “They have spent the last 10 years fighting to get information and it’s actually really cruel; it’s a cruelty what has happened to families. Why make families go through all this and then say, we’re going to try and close it all down?”

The Duffy family has been here before. A letter from the Historical Enquiries Team (HET) — a unit in the Police Service of Northern Ireland (PSNI) set up to investigate the more than 3,000 unsolved murders during the Troubles — prompted the siblings to search for answers.

“We said we’d face it together and sure enough it dragged it all up, tears, snots, everything, it brought it all back,” says Jennifer. “The next thing the carpet was just pulled from under us.”

The work of the HET was suspended and it would later be wound up. The family fought to receive a copy of its incomplete, draft report, and then spent five years campaigning for unrestricted access to the inquest papers.

The documents they have paint a confusing picture. Amid the rioting, at least 160 plastic bullets were fired; the family know little other than that one of them hit Duffy in the head, and the soldier claimed to have been firing at a petrol bomber — a claim rejected by the HET.

Original inquiries were seriously flawed; no civilian witnesses were spoken to and the soldiers were interviewed by the Royal Military Police (RMP) rather than the RUC, the police force preceding the PSNI, in a manner which followed a policy in place earlier in the Troubles on which the Lord Chief Justice would later rule that “no effective investigation had taken place in such circumstances”.

“I want the truth of my Da’s death,” says Jennifer Duffy. “I was there, I know they were shooting from everywhere and I know they were aiming at people’s heads, not their stomachs. I saw it.

“I know they’re hiding the truth and I know they’ll never be punished for what they’ve done, so come out and tell the truth.”

Neither has any faith that the UK government’s new approach will help families find out what happened to their loved ones. “Every family we work with has had to fight every single day to get any scrap of information,” says Duddy.

[ Bloody Sunday: Timeline of an atrocity and its long legal aftermath ]

“Once there were inquests going forward like that into Ballymurphy [when 10 civilians were shot dead by British soldiers in 1971], or the death of Kathleen Thompson, or you had the Bloody Sunday Inquiry, they realised all these deaths were unjustified.

“So they had to close it down, because they didn’t want any more unjustified killing verdicts, because every time a family gets that, that’s affecting their soldiers and changing the narrative of what they say happened here.

“It’s very difficult having a mummy and half her life is trying to get justice, and it’s hard watching her fight for the same thing over and over again and have nothing come of it,” says Mallaídh Duffy. “There are people who have spent years fighting and all they had was hope ... it is making families fade away to nothing, I think, the loss of hope.

“Personally, I feel like they are waiting for this generation to fade away and there’ll be nobody left to say, you caused this to our family.

PRESS STATEMENT in relation to the settlement of the Campbell family Civil Case, Monday 21 November 2022
Cousin of Murder Victim, Sean Brown, speaks out against "Legacy Bill"
File with PPS after soldier interview- McGreanery Case Update
'Comfortable in his Coffin'
'The Impact on our Family was Colossal' Billy McGreanery
Statement from the family of John Pat Cunningham after the unveiling of a memorial to Dennis Hutchings at Palace Barracks
Kathleen Thompson Inquest Verdict
INQUEST VERDICT VINDICATES THOMPSON FAMILY