Events in Derry and Belfast to show solidarity with the Tamil people of Sri Lanka who continue to suffer discrimination and violence. 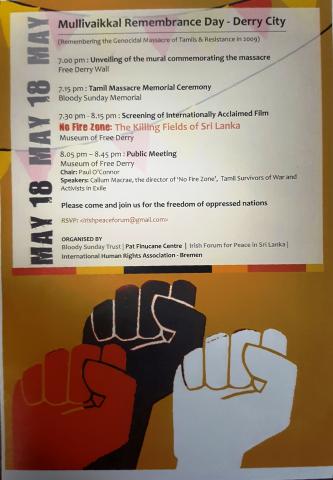 The conflict in Ireland might seem a world away from Sri Lanka - but look a little closer and the parallels begin to emerge.

In both countries, British colonialism used surrogates to protect itself from insurgencies by oppressed people seeking human rights.

In Sri Lanka, terrible violence broke out between the majority Sinhalese and the minority Tamil peoples.

Join us in Belfast and Derry to show solidarity with the Tamils who continue to suffer discrimination and violence.

One highlight of the events will be the showing of the film-documentary No Fire Zone: Killing Fields.

This highly-acclaimed and prize-winning film tells how Tamil civilians were encouraged to gather in a "safe zone" - but were then attacked mercilessly.

Thousands died,  Hospitals and food convoys were bombed.  There has been no justice for the victims.