The UVF murder of a Carndonagh teenager over 40 years ago will take centre stage in the Belfast Courts this Autumn as his brothers battle on, determined to discover the truth about who was responsible for his death. 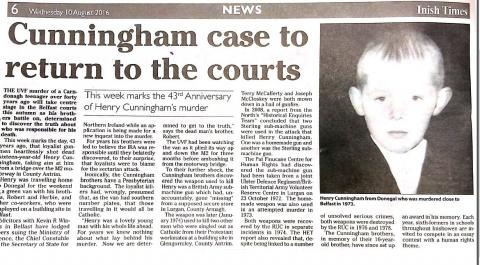 This week marks the day 43 years ago, that loyalist gunmen heartlessly shot dead 16 year old Henry Cunningham, taking aim at him from a bridge over the M2 motorway in County Antrim. Henry was travelling home to Donegal for the weekend in a green van with his brothers Robert and Herbie and their co-workers who were employed on a building site in Belfast.

Collusion issues to be raised in court in the coming weeks. UDR weapon used in motorway ambush.